Larceny Games: Sports Gambling, Game Fixing and the FBI – an Interview with Brian Tuohy – Part One 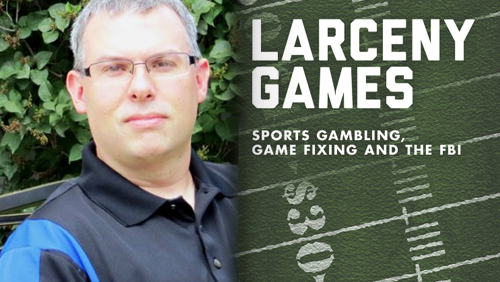 “Don’t write this book. This is not for the faint of heart. They are going to fucking kill you if they can.”

That’s the opening line of the controversial, and absorbing, tale of deceit, lies and chicanery that the author Brian Tuohy uncovers in the book Larceny Games: Sports Gambling, Game Fixing and the FBI.

It was a quote from Dan Moldea an investigative journalist who in 1989 released a book called Interference: How Organized Crime Influences Professional Football, a book that Moldea claims destroyed his career.

So why would Brian Tuohy want to tread on those same icy waters?

I find out in this two-part interview with the man himself.

So why did you decide to go against the advice of Moldea and create this book?

Moldea’s fear was that writing Larceny Games would bring the wrath of the leagues down on me and wreck my career, as he believes the NFL did to his. Well, I don’t really have a “career” to ruin. I’ve yet to make any real money doing this so it’s more of a hobby for me, and I wasn’t going to be deterred. I wanted to write this book to prove to the naysayers I’ve encountered that our professional leagues have been infiltrated by gambling, that games have been fixed, and this corruption will continue unless something is done. My hope was this book would lead to more discussion about the legalization of sports gambling and what a positive influence it could have on sports. Instead, as I expected, and wrote about in the Introduction, the sports media overtly ignored the book and continues to act as if gambling on sports doesn’t exist.

The return of online gambling in Nevada, New Jersey and Delaware is just the beginning for what I believe to be a return to legalized sports betting in the US. There is a view to be taken that the revelations in this book could harm this process?

My book isn’t intended to set back the talk about ending the nationwide gambling prohibition. It’s meant to enable its repeal. The corruption I discuss—the gambling, game fixing, etc.—is a product of everything being in organized crime’s control. That’s the part of the leagues’ anti-gambling argument that is so absurd. They talk as if keeping it illegal – keeping it in the mob’s hands – makes the games more legitimate. That’s crazy talk. Legalization along with monitoring the action on these games as they do in Las Vegas would bring more integrity to the game, not less.

The National leagues seem to be extremely instrumental on the legalization of sports betting in the United States. How are they playing their part in this process?

Each league does have a security division, which are staffed with former members of the FBI, CIA, DEA, Secret Service, and other law enforcement entities. These guys definitely know how to conduct an investigation, and many remain in contact with their former employers. At the same time though, the security divisions lack true police power. They can’t wiretap, subpoena, get someone under oath, etc. So how much can they really do? How deep can they go?

I know there are investigations they’ve conducted into corruption within their respective sport that have never seen the light of day. I think they should make more of this public, rather than covering it up. Because when something like the Tim Donaghy scandal erupts, a lot of fans wonder, “What was the league doing?”

But the main purpose of the security divisions is to help maintain that appearance of integrity. That’s what the leagues truly sell: the integrity of their respective sport. If they continually talk about investigating this player for this possible crime, or that team for some sort of cheating, that integrity would vanish. So they go with the “all is well” lie because it’s much better for sales.

You mention in the book that ‘gambling isn’t match fixing’. What’s your view on professional sportsmen and women not being able to gamble on sports that they are a part of?

I completely understand where the leagues are coming from with this stance. Players gambling threaten integrity, or at least the public perception of it. The leagues cannot allow players to gamble upon their own sport, and definitely not on games in which they participate.

A perfect example is Pete Rose. A lot of fans feel he should be in the Hall of Fame. I am 100 percent against it. Here’s why: say the Reds were playing the Cubs in a three game series. Rose bets the Reds in Game 1, and burns through his bullpen in a close game to win both the game and his bet. Then he bets on his team in Game 2, and uses up the other half of his bullpen to ensure a win as well. Now come Game 3, Rose doesn’t bet. Well, first, that’s a tip to his bookie(s), “Bet the house on the Cubs. Rose doesn’t think his team can win.” That creates a chain reaction in the gambling world. This is inside information, as was the fact that Rose was betting on his team in the first two games (and that alone was grounds for banishing Rose from baseball). But what many fail to realize is that Rose did manipulate the first two games to win his bets in the way he used his bullpen. It’s not game fixing in the traditional sense, but he clearly wasn’t managing his team in the proper way—all because his money was at stake.

If you allow players, coaches, etc. to bet on games in which they play, the Rose scenario would be multiplied ten-fold and be an utter disaster for everyone involved.

You talk about the FBI Sports Presentation Program in your book. I couldn’t help thinking this was a complete and utter waste of time and money. What’s your view?

I don’t think such presentations were incredibly effective, and from talking to some of the former FBI agents who gave them, I think they’d agree. I liken them to the drink driving movies we’ve all been subjected to which show the horrific results of drunken driving accidents. A tad shocking perhaps, but most people forget the message as soon as they walk out of the room.

In the case of these FBI presentations, at least it was something. The leagues weren’t completely ignoring these potential dangers. It was a warning about drugs and gambling from FBI agents working these types of cases and dealing with the mobsters on a daily basis. For newcomers, it was eye opening, but for veteran players who had heard these stories year after year, it quickly lost its potency. Yet it did offer the players a medium to talk about these issues with someone outside the league, rather than revealing potentially incriminating information to their team. So I don’t think it was a complete waste of time.

What would happen if a top name in the NBA such a Kobe Bryant were found to be gambling on NBA matches?

It would be one of the biggest sports scandals in recent memory. But even with the leagues’ supposed fears, I don’t think it would really do anything in terms of affecting fandom, because if things like cancelling a World Series and a Stanley Cup Finals doesn’t deter fans, a gambling scandal certainly won’t.

Such a scandal would only come to light, however, if law enforcement revealed it. The sports media would never discover and print such information since in my opinion they don’t do much of any true investigative reporting. And a league would never openly admit to such a thing unless threatened by the media. So like many of the other sports scandals we know about, it would have to come from the hands of the law.

What’s your view on the recent soccer scandals to hit the world news, in particular the assertion that players earning ungodly amounts of money, at the highest level, could be involved?

I think it should be a warning to American sports fans. Some of the biggest soccer leagues—Bundesliga in Germany, La Liga in Spain, and Serie A in Italy among others—have all seen match fixing scandals erupt. World Cup soccer games have been fixed. So how is it that no professional game in the US has suffered a similar fate, especially when we know that vast amounts of money are being wagered on games here?

It also proves that a player’s salary, no matter how large, is not really a protectorate from fixing. I was recently a guest on the Boomer and Carton radio show on The Fan in New York City. During my interview, Boomer Esiason claimed that with what players make today, it would be hard to bribe them to fix a game. Yet in the same breath, he conceded that if you jammed up a player who had a drug habit or a gambling habit, it could be very easy to get them to shave points. Well, which is it, Boomer? From what I know, I’d say Boomer’s second statement is much more correct. We’ve seen numerous multi-million dollar athletes go broke, even while still playing. A big contract may be a slight deterrent to fixing, but this is a crime of opportunity. If a player gets in trouble (or gets friendly) with the wrong sort of people, it can lead to him giving away inside information, or worse, to fixing a game.

This interview continues in Part Two when Brian Tuohy delves deeper into the corruption that exists in specific sports.

Brian Tuohy is considered one of America’s leading experts on game fixing in sports. He is the author of two books on the subject—The Fix Is In: The Showbiz Manipulations of the NFL, MLB, NBA, NHL, and NASCAR, and the recently published Larceny Games: Sports Gambling, Game Fixing, and the FBI. He runs the website thefixisin.net and contributes content to SportsOnEarth.com.