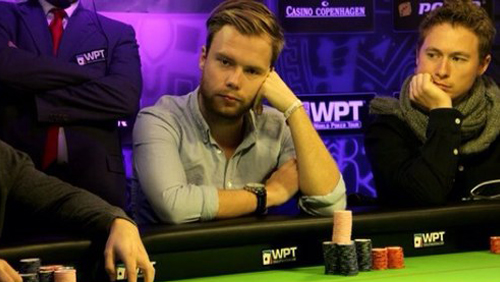 European Poker Tour (EPT) London has come to a grinding halt and it’s the 27-year old professional poker player from Sweden, Robin Ylitalo, who has won the main event for a first prize of £560,980 after beating the Grecian Georgios Karakousis in heads-up action.

Anyone monitoring the progress of Robin Ylitalo would have known that it was only a matter of time before his online success transferred to the dirty green baize in a raft of headline poker news.

There have been moments of magic: an eighth place finish at EPT Campione (2012), fifth place finish at World Poker Tour (WPT) Copenhagen (2012) and sixth place finish in a $1,500 at the World Series of Poker (WSOP), the more notable runs, but something always got in his way from taking one of those top three spots.

Robin Ylitalo is the latest member of the elite EPT champion’s fraternity after defeating Georgios Karakousis in heads-up action, as the final day of an amazing tour came to a stop at the Grand Connaught Rooms in Covent Garden, London.

Let’s have a look at how it all went down:

How often do you see the short stack eliminated first?

It’s pure mathematics and despite his fervent support, Killy Sidhu, could do nothing to change the logic of being the shortest stack on the table.

He was going to be all-in quicker than anyone else, and so it proved, when he got his chips in holding ace-queen against the jack-ten of Georgios Karakousis who was seated in the blinds. A second jack popping out of the box on the flop to send Sidhu spinning out of the contest.

The second player to reach an EPT final table before this event was the Norwegian Jan Olav Sjavik, otherwise known by his online moniker Balrog.

Sjavik finished third back at EPT3 in London, and this time he would have to settle for seventh after being eliminated at the hands of Ludovich Geilich. Pocket sevens for the Norwegian finding a dominated partner willing to tango in the form of pocket nines of the German. A third nine on the flop sealing his fate and extinguishing his fire.

This is the level that the Swede took charge of this final tables and it was Stefan Vagner who was willing to sacrifice his spot in order to make that happen. The Slovakian making a move when he four-bet jammed in a bluff holding queen-jack, only for Ylitalo to pick up ace-king and make the call.

In previous final tables Ylitalo might have lost this race, but not today. Big Slick doing its job, Wagner was out and Ylitalo took the chip lead.

The 30th level of play was the most productive of the five, with three eliminations setting up a heads up encounter between Robin Ylitalo and Georgios Karakousis.

Jeff Rossiter was the first player to leave. The Australian was many people’s favorite for this event after starting the day with all the experience and the chip lead, but fifth was the best he could do after Karakousis won the crucial flip KQ v 44 when a queen turned up on the flop.

Former United Kingdom and Ireland Poker Tour (UKIPT) winner Ludovic Geilich capped off a superlative 2013 with a fourth place finish. The German opened up the cutoff before moving all-in over a Ylitalo three-bet holding [Qh] [8h]. The Swede called with the dominating ace-queen and an ace on the flop ended any hopes of a turnaround from Geilich.

Finally, the level saw the final throes of Leo McClean. The young lad who qualified for this event playing on PokerStars for £93 managing to turn that investment into £249,850 after coming third. It was another flip, with the pocket treys of Karakousis holding on against the [Ad] [Qd] of McClean to take the main event into its heads-up phase.

The heads-up action started with Ylitalo holding a 11.120m v 7.110m chip lead and it would prove vital as both players picked up aces in their hole cards and decided to make a stand. It was ace-six for Karakousis, ace-king for Ylitalo and five community cards later the king kicker had booted Karakousis out of the park and Ylitalo was the champion and £560,980 richer.