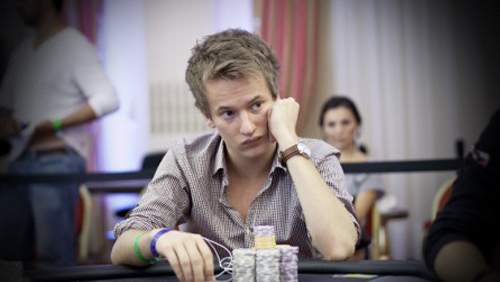 European Poker Tour London Day 2 has come to an end, and the surprise package is the high stakes cash game player Andy Moseley who finished 5/107. Tudor Purice leads with 628,200 chips.

So we had a total field size of 604 players and by the end of five 75-minute levels we were down to 107, with Tudor Purice the name in most media poker news outlets holding the chip lead with 628,200 of those bad boys.

Let’s take a look at how the day shaped up.

It should come as no surprise that 25% of the field is British given that the tournament is being held in London. Former EPT London champion Vicky Coren started well doubling with KK v AQ, as did Sam Trickett who eliminated Morten Mortensen when the pair both got it chasing a flush draw; Trickett winning the hand with ace high to send the Dane packing.

Three Brits who had reverse fortunes were the World Series of Poker (WSOP) bracelet holder Barny Boatman, former EPT champion Liv Boeree and Luke Schwartz. All three of them struggling to find momentum and were out in the first level of the day.

Did you know Viktor Blom had an older brother? Well his name is Sebastian and he eliminated David ‘Bakes’ Baker in a three-way all-in involving James Parker. It was 77 for Blom, TT for Bakes and QQ for Parker; the board running out for a straight for the Swede to effectively triple him up and send Bakes back to America.

Philipp Gruissem lost a flip against Luis Rodriguez to find the rail, and his fellow super high roller buddy Tobias Reinkemeier who was eliminated by John Juanda joined him. Former Norwegian football star John Carew also bit the dust along with the Grinder Michael Mizrachi.

Level 10: The Reigning Champion is Out

The exit of Ruben Visser means there will not be a back-to-back champion this year (or any year for that matter!) Marcel Luske also joining his countryman on the sidelines.

David Vamplew was making a play to become a double EPT London champion when he eliminated both Loo Junzhong and the former EPT champion Zimnan Ziyard. KTss doing the damage in a three-way all-in that saw a king on the river pip 77 and A8 to the post. Vamplew would get through the day with 123,900 chips.

Sebastian Blom doubled once again; this time through Olof Haglund when his QQ stood strong against AQ. Blom made it through the day with 271,000 chips.

Ole Schemion will not be replacing David Benefield at the top of the EPT10 Player of the Year board quite yet. The impressive German running out of steam in the 10th level, as did Martins Adeniya, Ludovic Lacay and the great man himself Mr. Phil Hellmuth.

Jeff Gross eliminated the diminutive Italian Dario Minieri KK v 99 – all the money going in on the turn with Gross hitting a set. Vanessa Rousso ran JJ into pocket aces to also find a place on the sidelines, and Davidi Kitai was starting to show some promise at the top end of the chip counts.

Mike ‘Timex’ McDonald suffered the double ignominy of facing an exit, and having photographs of Mike Watson pissing over his yellow Lambo spread around the Twittersphere.

Timex getting it in with AQ on [5h] [4d] [3s] [As] only for Tudor Purice to be holding deuces for the wheel. The river bricked and Timex was last seen outside the Grand Connaught Rooms pissing on Mike Watson’s taxi.

Two more British exits in the eleventh level of the day saw Dermot Blain running AQ into kings and Neil Channing quoted as saying he ‘only played four pots all day and lost then to the same guy;’ the death knell coming with pocket nines versus pocket aces.

Andy Moseley doesn’t play tournaments, preferring instead the cash game scene in Macau, but when he does play his deep stacked poker mind is well suited once he gets on a roll, which is exactly what he did during Day Two.

Moseley exchanging the chip lead with Dan Smith who eliminated John Juanda in a bluff that fell on the right side of the fence, somehow managing to get it in with pocket treys against the pocket aces of Juanda – a trey on the river prompting a series of ‘I’m sorry’ comments from Smith. Smith would end the day with 179,300; but Moseley would end up with 436,000.

Level 13: Tudor Finishes Strong as the Brits Head For the Door

The final level of the day was not a good one for the British contingent. Jake Cody lost a flip against Shawn Buchanan to be eliminated, and he was joined by Vicky Coren who lost her trash-flip against Tudor Purice (A3 v K4 with a king on the flop and four on the river cutting her tournament short).

Andy Moseley lost a flip 88 v AQ of Jason Tompkins to slow his progress, and then Tompkins was eliminated by Sebastian Mueller when his pocket nines were crushed by his pocket aces.

Sam Trickett lost a string of pots to lose his lifeline in the last level of the day, and Stephen Chidwick was another top Brit who would see the light of Day Three, as was Julian Thew who despite eliminating Noah Boeken AJ v AQ when he turned a straight would lose the lot by the end of the day.

Kitty Kuo eliminated Michael Tureniec to finish with a flurry, but it was Tudor Purice who finished the strongest after eliminating Onur Guvan AK v QQ to take the chip lead at the end of Day Two with just 107 players remaining.

For a peek at the Day 1A recap click here.

For a peek at the Day 1B recap click here.