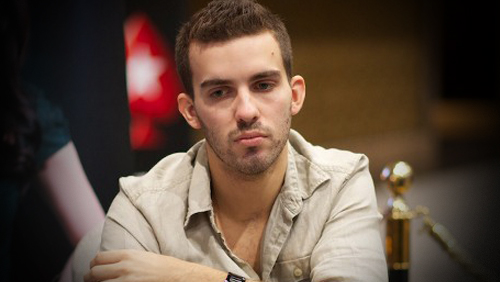 European Poker Tour London has reached it’s climax and the Aussie Jeff Rossiter leads a final table that includes a Grecian, a Swede, a Slovakian, a Norwegian, and three Brits, as £560,980 awaits the winner.

When the penultimate day of EPT London began, Jeff Rossiter was sitting ominously 9/16. There was nobody left in the final 16 that had earned more live tournament coin that him, and nobody who had experienced the business end of a tournament of this magnitude like him. So it should come as no surprise that when the final table resumes later today, he will be the chip leader and favorite to the take the EPT title down under.

Let’s take a look at the days action:

Level 23: Rossiter With a Great Start

It was Rossiter that started the fasted of the 16 with the elimination of the beautifully named Neophytos Neophytou. It was all-in pre flop with the Australian holding [Ac] [2c] and the man with the name like a Gladiator extra holding pocket kings; an ace on the flop doing the damage and Neophytou was the first player eliminated.

It seemed for all the world that the curse of the kings would strike again when Kully Sidhu got it in all in holding the cowboys only for Kent Roed to show up with pocket aces. To make matters worse for Sidhu, the dealer placed [As] [7s] [6h] onto the flop to all but fry the skull of Sidhu.

The game of poker is never short of suprises and the British crowd erupted as runner-runner spade hit the felt to hand Sidhu the nut flush and send the bamboozled Roed to row Z.

Next we lost the Day Two chip leader Tudor Purice in a hand against Georgious Karakousis. The Grecian opened the action from early position, Purice three bet to 104k, and Karakousis made the call. The flop was [Kd] [8c] [4d] Karakousis checked, Purice bet 105k, Karakousis check-raised to 210k and Purice called.

The turn card was the [Qd] Karakousis Lead for 200k, Purice moved all-in and Karakousis made the call. It was [Ad] [9c] for Purice and [4c] [4h] for Karakousis. Purice needing a diamond on the river to survive, but not the diamond he eventually got. The [8d] handing Purice a flush, whilst simultaneously handing Karakousis a boat.

It’s been a sterling year for Nicolau Villa-Lobos who can count a UKIPT Main Event victory in Edinburgh and an 18th place finish at EPT Barcelona as two cracking scores, and he once again went deep before exiting at the hands of Javier Etayo.

The hand that did the damage was an all-in and call holding pocket tens against the pocket kings of Sen Ung. That hand crippled the Brazilian and despite doubling through Robin Ylitalo shortly after, was eventually eliminated: J5 v A8 when two aces turned up on the flop to end any hopes of a comeback.

The overnight chip leader, David Yan, was the next player to be eliminated when he ran [Ah] [2d] into the pocket queens of Karakousis. 12th place and £32,810 must have been a disappointment given his stature as starting day chip leader.

Firstly, Javier Etayo was booted out of the contest when his pocket jacks lost a flip against the ace-queen of the Aussie, and then Sen Ungh met the same fate when [Ac] [5c] ran up against the dominating ace-jack of Rossiter.

The final table was set after the Day Three chip leader Martin Kozlov exited in a cooler against Stefan Vagner.

The Slovakian opened the action from under the gun, Koslov three-bet to 515k and Vagner called. The flop was [Ad] [8s] [6d] and Vagner put Kozlov all-in, who duly called, and it was a set of aces for Vagner facing off against the pocket queens of Kozlov. Turn and river duly bricked and the final table was set.