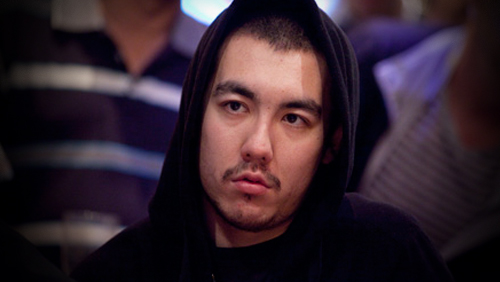 European Poker Tour (EPT) London Day 3 is in the books and Martin Kozlov hits a succession of sets to find his way to the top of the leader board with just 45 players remaining.

It started with 107 players, ended with 45, 87 of them got paid, one poor blighter bubbled, 20 players went home with nothing but a hard luck story to share with people who didn’t care and much more riveting poker news.

Here is the Day 3 Recap:

Level 15: The Day 1B Chip Leader Doesn’t Make the Cut

The first shock of the day was the elimination of the Day 1B chip leader Maximilian Senft. The starting flight chip leaders normally find the money, but it was not to be for this particular Austrian. But to be fair it was a bit of a cooler.

Senft getting it in with pocket kings against the ace-king of the EPT regular Robin Ylitalo. The ace would fly out of the deck on the turn; a stunned Senft would leave his chair and a smiling Swede would end the day in the top five of the chip counts with 716,000 chips.

Day Two was a particularly good day for Andy Moseley, but he didn’t show up until one hour had passed in Day Three. The resulting damage? 25k in tournament chips and quite a lot of dough lost in a juicy cash game that kept him playing until 07.30 that morning. You wouldn’t have thought it though. Moseley ending the day with 475k.

Triple Crown winner Davidi Kitai left the tournament after Timothy Adams cracked his aces with pocket jacks. The Canadian flopping a set to send the Belgian flying and Adams will also be playing on Day 4 with 271k.

Barry Greenstein was confirmed as the bubble to the bubble, when he was unfortunate to be eliminated against the overnight chip leader Tudor Purice. The action folded around to Purice in the small blind and he used his big stack to good effect when he moved all-in holding king-four. Undeterred, Greenstein made the call with king-jack but a four on the turn sent ‘The Bear’ grizzling.

When the bubble crown was laid, it went onto the head of Steven Lewzey. In the biggest case of ‘co close but no cigar’ of the day, Lewzey found himself all-in in a three-way pot against Ziv Vachar and Kuljinder Sidhu. Lewzey was chasing a flopped flush draw but it never materialized. Sidhu squeezing Vachar out of the pot on the river and he scooped with pocket aces to give everyone else in the room £9,080.

Three more eliminations before the end of the break. For the second time in two levels a Winamax Pro had their aces cracked when Gaelle Baumann got it in on a [8c] [5x] [4c] flop holding the rockets, against Peter Charalambous holding [Qc] [Jc] for the draw. A [5c] on the river settling that matter.

Fabian Quoss moved his shorty into the middle with [Jd] [6d] and was called, and beaten, by Sebastian Mueller and ace-eight; Theo Jorgensen was in a similar spot against Paul Berende and met a similar fate, before Dave ‘Devilfish’ Ulliot eliminated Dan Smith AQ v QJ. Devilfish probably doesn’t even know who Dan Smith is.

When this feast of poker started out several days ago it was Dhru Patel who was in command with the Day 1A chip lead. Unlike Max Senft, Patel did make the money, but we won’t be seeing him on Day 4. A lost flip against Ilan Suloman sending Patel to the rail.

Steve Silverman and Rasmus Vogt were both eliminated by the very fortunate Jeffrey Rossiter. It was pocket eights for the Australian, kings for Silverman and jacks for Vogt. An eight on the flop creating a winner out of a potential loser and Rossiter would finish on 601k.

The level would end with another pair of aces getting cracked, proving that the best pre flop starting hand in NLHE is not always going to win.

Chris Brammer picking them up in a three-bet pot against Martin Kozlov holding pocket tens. The money went in on the turn on [Jh] [Tc] [7h] [4h], Brammer was out when the river bricked and Kozlov was the new chip leader.

It’s going to be a minor miracle if an EPT Champion achieves back-to-back success such is the strength of these tournaments, and the last remaining EPT Champion fell at the final hurdle of Day 3.

David Vamplew won £900,000 in this tournament back in 2010, but would have to settle for £10,255 in this one. The Scotsman losing a flip in a hand against Wai Kin Yong to kill his dream for at least one more month.

That man Kozlov became the first player to breach the seven-figure mark after eliminating Daniel Reijmer. Once again Kozlov flopping a set, this time against Reijmer who also flopped a set. Unfortunately, a set of jacks is always going to beat a set of tens and Reijmer was out.

Keep your eye on these players: