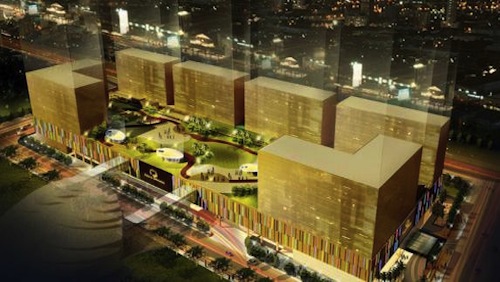 Belle Grande hasn’t even opened yet and it’s already getting a name change.

Seems like an odd turn of events, but that’s exactly what’s going to happen after Melco Crown co-chairman Lawrence Ho visited the Philippines to formally unveil “The City of Dreams Manila”.

Or as it was supposed to be known, Belle Grande Manila.

The surprising change in name may have caught a lot of people by surprise, but it’s hardly a shock considering that Melco Crown is the partner of Henry Sy’s Belle Corporation and probably has equal say on what to name the casino when it’s gold-themed towers open for business sometime next year. The reason for the name change wasn’t disclosed but all points seem to lead to a decision to tie up the new integrated resort and casino with a name that’s long been a standard bearer in Macau: The City of Dreams.

Thus, The City of Dreams Manila it is. Has a nicer ring to it than Belle Grande, if we do say so ourselves.

Far more than just renaming the resort and casino, Ho’s visit to Manila also gave him a first-hand look at how Pagcor’s Entertainment City is shaping up. Solaire Resort and Casino is already open for business with The City of Dreams Manila set to follow suit next year. As far as offerings are concerned, Ho isn’t leaving any stones unturned and is determined to give The City of Dreams Manila all the resources to be a major player in the burgeoning casino industry in the Philippines. He’s raised the company’s budget to somewhere in the vicinity of $680 million, all while promising to equip the establishment with over 3,000 slot machines and 365 gambling tables.

It’s easy to point to reasons why Ho is determined to turn The City of Dreams Manila into a true global destination. For one, it’s his first casino venture outside of Macau and he’s confident that the Philippines is setting up to be a prime casino hub that could generate in excess of $4 billion in revenues in the next couple of years. And in true businessman fashion, Ho has high hopes for The City of Dreams.

That means pulling out all the stops, which Ho is determined to do that by making sure that his junket partnerships are second-to-none. And if it means that he has to personally fly in high rollers from Macau courtesy of his private jets, then so be it.

Lawrence Ho is putting all his chips in the table, an ironic metaphor considering the man doesn’t gamble, yet appropriate enough to describe his mission in turning The City of Dreams Manila into one of the best integrated resorts and casinos in the region.