On Saturday March 16, 2013 Manila welcomed its newest and most luxurious casino as the Solaire Resort and Casino opened its doors to the public with a lavish ceremony.

The CalvinAyre.com news team was given a special tour earlier this week to checkout the US $1.2 billon resort and casino. 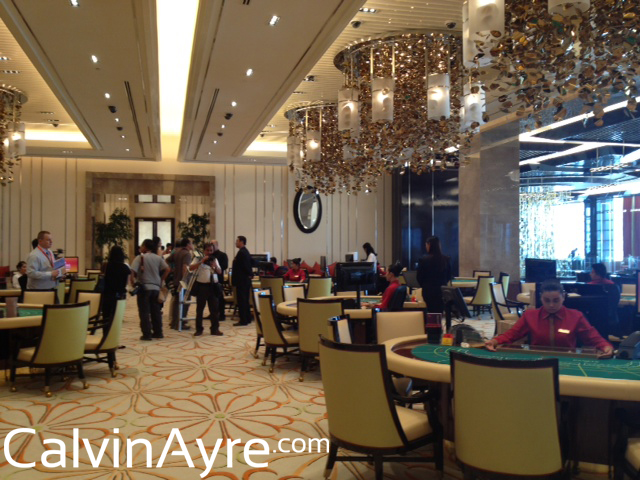 The first phase of the Solaire includes 300 tables and 1200 slot machines with seven restaurants and a 500 room 5-star hotel on the premises.

The Solaire is the first of several integrated casino resorts being built in Manila’s new Entertainment city. As Solaire will be the first to market, it will enjoy an 18-month head start over its competitors.  The head start will be a big win for Solaire Chief Operating Officer Michael French, “So Solaire we believe being the best operation meaning the most luxurious product with the best service and being first to the market is all good because we are introduce a style of gaming here that doesn’t exists here now, and being the first to introduce it and operating in the sector with virtually no competition is quite valuable to us.”

Part of the luxury French talks about is combining the entertainment feel of Las Vegas with the serious business aspects of Macau.  On the lower floor, the Solaire does its best Las Vegas impression with beautiful showgirls, stunning décor and free alcoholic drinks while you’re playing. The free drinks while you play is something I can tell you doesn’t happen at other casinos in Manila, it’s a small touch but it will be a big hit with the local gambling crowd.

On the second floor, the VIP area, Solaire has a multinational service staff that can cater to their VIPs in their own languages. The main VIP room features floor to ceiling windows where players can look out over Manila bay while they are playing their hands of blackjack or baccarat.

Solaire will provide plenty of economic positives for manila and the Philippines by attracting a gambling clientele from all over the region but beyond the tourism dollars, Solaire has already hired 4500 employees.

Of the 4500 employees, about 500 are former overseas Filipino workers. This is the type of action that builds favor in the community; so many Filipino families have to deal with one or more members working overseas to make money to send home. With Solaire attracting former OFWs home, it allows families to be reunited and with the experience the OFWs have gained overseas, they can come home and raise the talent levels of the local workforce.

The Philippines gaming market did US$1.9 Billion in revenue last year but with the opening of Solaire, and soon other resorts in the new entertainment city, COO Michael French feels the Philippines should surpass Singapore as the number two gambling market in the region, “We don’t have any illusions or delusions of exceeding Macau but we do think we have a real good shot of exceeding Singapore one day.”