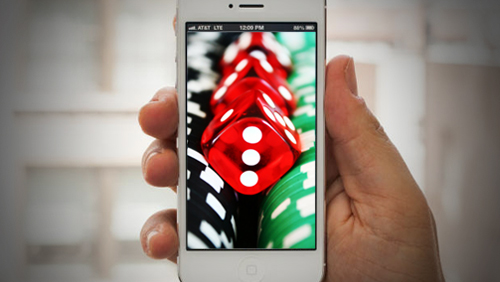 It’s an interesting corollary that obesity rates make a statement that we are spending more and more time locked up in our houses, and simultaneously mobile gaming figures are skyrocketing towards another solar system. I guess we are not all as housebound as many cynics would like us to believe.

I am one of those modern day agoraphobics. It’s a condition that has arisen in line with the tides of the Internet revolution. And it’s this lifestyle that makes it vital that when I do leave the sanctity of my bright blue door, that I take my little piece of the Internet with me. Mobile is a must for me, but is it a must for everyone? What about the professional poker players?

You only have to look at Norman Bates to see the damage one too many nights in a hotel room can do to your sanity. During the dark ages, when the mobile phone resembled a house brick and there was no such thing as the Internet, I used to take my PlayStation with me whenever I had to stay in a hotel for any length of time. Such was my desperation to be entertained, during these trips; I would also take my portable television just in case the hotel version didn’t have the requisite holes in the right places.

Technological advancements meant I was soon the owner of a laptop. FIFA Soccer on the PlayStation could now be replaced by hours of online cash game poker, which was great because the portable TV was starting to get heavy. Hotel time was now fun time and I never needed anything other than my laptop and Internet connection.

By this time my telephonic type brick had been replaced by a classy iPhone. I could access my e-mail and social media handles from all over the world. When we think about the mobile gambling movement we have a lot to thank Apple and Android for. Without their technology, mobile gaming wouldn’t have been able to outgrow its nappies.

It wouldn’t be long before I could ditch the laptop and play online cash games on my phone.

It wasn’t long before we were hearing news of a Bwin.Party mobile casino player who had won £1.4m playing an online slot machine on his mobile phone. Not to be outdone, Microgaming then announced that a Spin Palace player had won £3.74m playing the Mega Moolah slot machine whilst ‘on the go.’

As we find ourselves in the midst of a mobile gambling boom it’s interesting to seek out the professional poker players view on how this has impacted their day job. Poker is a form of gambling after all, and those mightiest in the online gambling world have all created an online poker app.

The first thing to remember is a mobile poker app has been designed to play poker ‘on the go’. This is why during my research I didn’t find a single professional player who prefers to sit indoors and play online poker on a mobile device. As Chris ‘NigDawG’ Brammer pointed out me: “Tournament’s aren’t quick five minute time fillers you know.”

For a professional poker player, the mobile poker app should be viewed as an extension to the desktop offering, and not as a separate entity. A view shared by the World Series of Poker (WSOP) bracelet winner Craig McCorkell.

“I use the PokerStars app and really like it. I use it mainly when I have to leave the house and am still involved in tournaments.” Said McCorkell.

Great advice from McCorkell, although I just think he needs to grow a pair and tell his girlfriend to go and get the fish and chips. Jamie Sykes is another believer in the value that the PokerStars mobile app can bring for the professional MTT grinder.

“I really loved using the Stars app when I was an MTT pro. It was great to reg or unreg tournaments on my way home so I never had to miss out on the action,” said Sykes before continuing, “I see it as a great poker assistant.”

Poker is a game of extreme concentration, and in my opinion the mobile app should only be used as a last resort for the pro. There wasn’t much intelligent thinking going through the mind of the £3.74m winner of the Mega Moolah jackpot, and neither is there much thinking involved in placing a bet on the 15:30 at Kempton.

In a blatant contradiction I am now going to say that poker can be very boring. Just because it’s a game that requires extreme concentration does not mean you cannot play without it. The live tournament arena is filled with mobile devices and tablets, and many players now multi-table both online and live, and for large sums of money.

“I’ve only used the PokerStars app so far and I find it very good,” said EPT Madrid runner-up Fraser McIntyre, “but they are especially good for the sickos who are grinding a live tournament and feel the need to multi table.”

Adam ‘Roothlus’ Levy made his way to the final table of the €500,000 guaranteed EPT Monte Carlo Cup last year, whilst also making the final table of a SCOOP event online. Levy would go on to finish third in the live event and incredibly win the SCOOP event. What is interesting about that run, is Levy switched to the laptop when things started to get serious.

The Pros and the Cons

The biggest problem with the mobile poker app is the size. It might go down well in Lilliput, but for people with big thumbs the game is a big no-no. That means the housebound obese will have to give this one a miss.

Chris Brammer is a world-class online grinder and he doesn’t use a mobile app. “I need a large screen and concentration for the amounts of money that are on the line.”

Martin Jacobson is also of the view that a big screen is a must, and despite downloading the PokerStars app, never uses it. The recent Mini FTOPS Main Event winner Luke Fields made a very good point when he reminded me that you would have to carry your security key with you if you wanted to use the PokerStars app. Fields has both Stars and Winamax apps but again rarely uses them.

Up until the time of writing I had only ever used the PokerStars app once in my life. I was traveling on the train to an event and thought it would be great to fill in the time with some cash games. Unfortunately, I kept losing Internet connection and never dared try it again after that.

“I’m always weary about playing on 3G, or away from a confirmed and reliable Internet connection.” Said Fields.

The Internet connection hasn’t bothered Sykes who said he likes to use the app for filling in dead time when at the bank/doctors/hospital, etc, and points to one tabling ZOOM poker as a great way to pass the time of day during these downtimes.

I think ZOOM is perfect for the mobile app but was disappointed to find that I could only play as low as $1/2 when I logged on this morning. Not that it should have bothered me because I couldn’t even work out how to play a ‘real money’ game. Each time I tried, I got the error message ‘table limit exceeded’ and there was no help function to sort the problem out for me.

Back in August, Simon Cross, founder of LuckyMobileSlots.com, wrote a guest post on CalvinAyre where he said the typical mobile gaming creature sees it as part of the whole package, and not as a standalone product. This is where I see mobile poker apps being useful. To be used in an emergency should the grinder have to leave the house whilst hard at work, and not as the preferred method of execution.