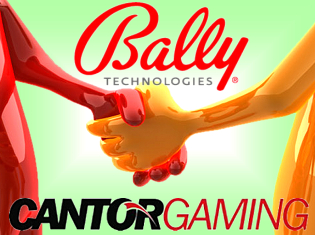 Cantor CEO Lee Amaitis called the deal a “tremendous fit” for both companies and looked forward to a “fruitful relationship.” Bally’s biz-dev VP John Connelly said Cantor’s mobile gaming content represented a “great new offering for our customers, especially with football season underway.” Bally’s iGaming Platform received an even bigger shot in the arm via the $1.3b acquisition of SHFL Entertainment in August.

Stateside, Bally has already inked free-play online deals with brick-and-mortar casinos in Nevada, New Jersey, Connecticut and Pennsylvania in anticipation of a switch to real-money online gambling down the road. In Europe, despite having opened its London office just one year ago, Bally has already inked slots content deals with over 25 operators, including William Hill, Paddy Power, Mecca Bingo and Mr Green. In July, Bally’s snr. sales director Tony Plaskow told Yogonet.com that inking so many deals wasn’t all gravy, as “a core challenge is to get them live in an acceptable timeframe,” especially since the Interactive division accounted for less than 100 members of Bally’s 3,000-strong global workforce.

Meanwhile, Bally CEO Ramesh Srinivasan and CFO Neil Davidson will speak at next week’s 2013 Gaming Investment Forum at the Sands Expo and Convention Center in Las Vegas. The Bally execs will offer their investment insights to attendees on Monday morning starting at 9:45am PST, with a webcast of the proceedings available via this link.