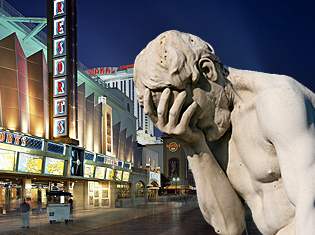 The boys (and girls) of summer weren’t kind to Atlantic City casinos, which saw their collective August gaming revenue fall 4.8% to $298.1m. Slots take was down 2.6% to $219.5m, while table games tumbled 10.5% to $78.6m. Unlike their Nevada regulatory counterparts, the New Jersey Division of Gaming Enforcement doesn’t break out its table revenue tally into specific games, so we have no idea whether AC was similarly undone by a VIP baccarat whale’s hot streak. For the year to date, AC’s gaming revenue is down 8.9% to $1.97b, putting AC on track for its first sub-$3b annual haul in over two decades.

Since misery loves company, AC should take some solace in that it’s not the only gaming jurisdiction suffering the end of summer blahs. In OHIO, the Casino Control Commission reported total revenue from the state’s four casinos was $70.9m, down 1.6% from July and down 15.9% from March, the first month in which all four facilities were open for business. All three facilities that were open in August 2012 reported year-on-year declines, including a 17.2% decline at Caesars’ Horseshoe Cleveland and an 8.9% drop at Hollywood Toledo.

In MICHIGAN, the three Detroit-area casinos saw August’s combined revenue fall 3.5% year-on-year to $112.9m, with MotorCity’s 1.5% gain not enough to offset declines of 4.8% and 7.7% respectively at MGM and Greektown. For the year to date, Detroit’s gaming hall revenue is down 4.5%.

In MISSOURI, five of the six St. Louis-area casinos posted revenue declines in August, leading to a collective 4% decline year-on-year to $89.2m. Only Pinnacle Entertainment’s River City posted improved revenue, and only by 2% to $18.2m. This is the 12th straight month the state’s gaming joints have seen overall revenues fall.

In ILLINOIS, the operators of the state’s riverboat casinos think they have the answer to falling revenue: two more hours per day. At present, Illinois’ floating casinos are required to close for two hours per day, but the Illinois Gaming Board will hear arguments as to why this practice should end at its next meeting in Chicago on September 19. Perhaps Atlantic City could find a way to switch to a 26-hour clock or something.