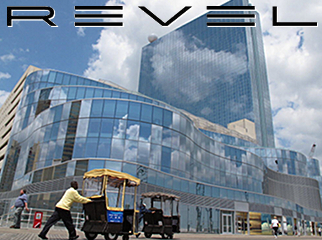 The promotion, which resulted in AC’s newest gaming joint posting the first profitable week in its year-long history, offered to refund all slots losses during the month of July. However, gamblers became irate when they read the offer’s “virtually illegible” fine print, which revealed that the refunds would be paid out over 20 weeks, and only in the form of game play credits that couldn’t be cashed out. The suit accuses Revel’s owners of relying on “deceptively hidden rules to avoid paying any refunds at all.”

Revel has struggled mightily since opening in April 2012, filing for bankruptcy in March 2013 with $1.5b of red ink on its books. Revel emerged from said bankruptcy in May with a promise that it would do more to attract gamblers, including ending its controversial smoke-free status, but Revel’s most recent quarterly report showed a loss of $40.8m vs. a $35.1m loss in the same period last year. Further evidence of Revel’s fiscal follies came on Friday when the casino announced it would no longer match employee contributions to their 401k accounts, although it “hopes” to be able to resume the contributions at some future date. Perhaps when Malaysian casino operator Genting buys them out?