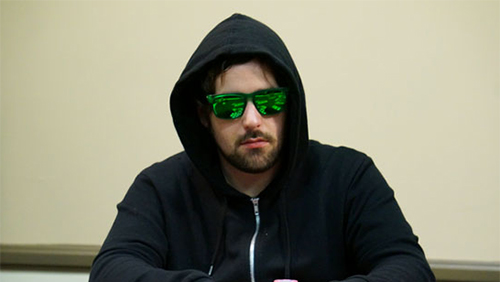 The Season XII World Poker Tour (WPT) Legends of Poker has reached its climax, and its the name of Jordan Cristos that is currently being etched into the silver plate adorning the WPT Champions Club trophy, after defeating the World Series of Poker (WSOP) bracelet winner Dan Heimiller in heads-up action.

It took 45-hands before the final table screamed into life and when it did it was everybody’s favorite Phil Laak who was making the most noise. The WPT Champions Club member was all-in for his tournament life, and in terrible shape, when his pocket tens faced off against the pocket kings of John Gordon. With his beau, Jennifer Tilly, encouraging the deck from the crowd, it duly did its job when it ran out to hand Laak a straight.

That terrible beat for Gordon would leave him with just three big blinds and they would go into the middle riding on the back of ace-ten shortly after. The overnight chip leader, Ryan Goindoo, would make the call with [Qs] [7s] and would nail two-pair to send Gordon out in sixth for $85,080.

Despite that double up Laak would be the next player eliminated. Jordan Cristos opening the cutoff and then calling off a small blind shove from Laak. It was pocket queens for the youngster and [As] [8c] for Laak; a queen on the turn handing Cristos a set and Laak had to settle for another near miss and $109,385 in change – Cristos was the new chip leader.

Alexandru Masek would leave the final table in fourth place after his [Jh] [9h] fell in the face of [Ad] [2h] of Goindoo; an ace on the turn too much for Masek to bear and he left with a check for $156,790. Instead, of consolidating those chips, Goindoo then passed them to the Dan Heimiller. The WSOP bracelet winner getting it in with [Ac] [8s], and Goindoo calling with [As] [4c]. An eight on the flop giving the veteran the hand, and he was right back into the thick of the action despite starting the day with the shortest stack.

The heads-up match up would be finalized shortly thereafter and it would be Dan Heimiller versus Jordan Cristos, after Ryan Goindoo left the tournament in third. It was pocket fives racing against the ace-king of Heimiller and two pair on the flop handed the ace-king the victory to send Goindoo out in third for $233,360.

Then after eight hours of action Jordan Cristos was declared the champion after he called an all-in from Dan Heimiller, and [Kh] [4h]. Cristos was holding [Ah] [9h] and a nine on the flop gave Cristos a pair, and it was just enough to shove Heimiller out of the door where he walked away $356,115 the richer. Cristos takes $613,355, a seat at the WPT Championship at The Bellagio and becomes a member of the coveted WPT Champions Club.