Home / Business / Glitz and Glamour as Stake Me to Play Launches 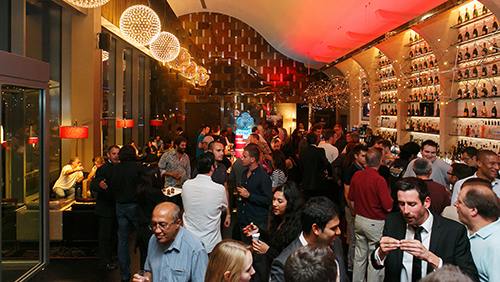 The glitzy launch event, held at Aspers Casino in Stratford London, saw hundreds of people turn up to celebrate the company’s official beginning. The VIP guest list was made up of the crème de la crème of the poker community – industry and media experts, as well as professional poker players with an interest in being staked.

In particular, there was immense variety in the players who attended. Pros of all levels made an appearance, from micro-stakes grinders all the way to famous tournament sharks including Paul “The Marbella Kid” Zimbler.

Stake Me To Play’s celebratory freeroll tournament swiftly got underway at 10pm. Seats for the tournament had been highly sought after, and play was jovial but fierce in a field of 60 extremely talented players. After a good few hours, the freeroll was eventually won by Brandon Sheils from Birmingham. Claiming the incredible first prize of a £5,000 seat to EPT London, Sheils will go on to represent Stake Me To Play in October.

Brandon, whose favourite players are Daniel Negreanu, Phil Ivey and Jake Cody, described the win as “an amazing experience”.

“I can’t wait to play in the EPT London and take down the pros!” said the 18-year-old, who is due to start studying maths at BirminghamUniversity in September.

Having played card games since the age of 8, Brandon will now benefit from Stake Me To Play’s world class training programme. He will receive coaching from the likes of Jared Tendler and other top strategists in order to help him prepare for the biggest tournament of his life.

“A huge thank you to everyone who came along and helped make it such a special night,” Operations Director Paul Conroy-Frost said.

“I’m delighted so many people turned out to show their support for Stake Me to Play, and we’re all really excited for the future too.”

With the fun and triumphant atmosphere lasting well into the early hours, it was certainly a night to remember. Everyone who attended would surely agree that the event was the perfect beginning for Stake Me To Play, and now all that’s left is for them to go on and make their mark on the poker world. Watch this space!

Stake Me to Play is the UK’s newest and most exciting poker staking company. With an ever-growing stable of profitable players, they use the latest technological and strategic developments to help players evolve into the best they can be.

The company is unique in offering a guaranteed monthly income to the players it stakes, and offers the greatest profit splits in the entire staking industry. It caters to poker players of all abilities, from beginners all the way up to seasoned grinders.

Stake Me To Play players benefit from their vibrant community and their personal, one to one player care along with their state of the art poker facility in the UK which provides a relaxed place for players to meet, socialise and discuss strategies with their in house world class coaches.

Why social media is all about ‘being human’ at the iGaming Education Forum for Growth Guru’s Joshua O’Cock
Press Releases
4 November 2016
.