Home / Poker / Ole Schemion Leads the Final 99 at the ISPT 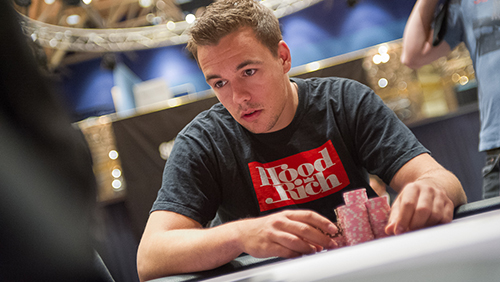 It was a mixed bag of emotions on the third day of the International Stadiums Poker Tour (ISPT). The Tournament Director, Simon Trumper, opened proceedings by confirming the final player total and what that meant to the prize pool. 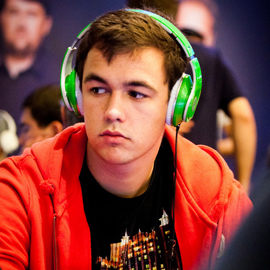 “So if you can have a whip around for me that would be great because after this tournament ends I will be looking for another job.”

Trumper was joking of course, but the harsh realities of life means that Rob Yong and Dusk till Dawn (DTD) are looking at an overlay of €589,000. Even if Yong is having support from the ISPT, it’s still a lot of money.

“Money is an easy thing to find.” Said Masquelier during an interview with CalvinAyre during Day 2B.

Phew…For a moment I was worried for Yong.

It didn’t take long for the action to reach the most bizarre money bubble I have witnessed. Half of the players inside the Beckham tent were ecstatic to turn their £30 & £300 satellite victories into a secured €500 pay day, and the other half – who paid €3,000 to enter – were still waiting to reach 81st position just to break even.

An angry Paul Zimbler was stomping around, complaining that the clock wasn’t being stopped. But in the main, most people were hopeful and full of beans. It was just like the good old days before poker laws took the buzz out of the bubble. Trumper would announce an all-in and call and players and media would throw themselves around the table like hyenas on an open carcass.

A rousing applause signified a tragic end for some pour soul, and I even saw Boris Becker clapping enthusiastically for his well earned €500. It was quite apt that throughout the majority of the bubble phase the tannoy was spewing out ‘Staying Alive’ by the Bee Gees.

After the bubble burst there was a quiet, almost serene atmosphere as people settled down to work. It was also bitterly cold and the players looked like penguins huddled together to try and fight off the beating winds as the player pool condensed. The music had been replaced by the sounds of football and the England v Brazil match was being broadcast on the two large scoreboards at either side of the stadium. Watching England v Brazil on a large screen, in an empty Wembley Stadium was certainly a new experience for me.

The floodlights came on and at one point one of the inflatable tents started to collapse. Security officials raced to the scene like rats following a piper and fortunately they managed to puff enough hot air into the thing to stop it crashing down onto the heads of the remaining players in the £1k.

As you looked down onto the pitch from the heights of the press box you realized why Monday’s action would have to come indoors. I was openly critical of the way that the ISPT told people that the play would be entirely on the pitch, only to change their minds. When you are here you can see how it makes total sense to move indoors. To just have a few poker tables in the center of this huge arena just wouldn’t seem right. That being said I would have loved to see one solitary table in the center of the pitch for the heads-up showdown.

99-players squeezed into the fourth day of action and despite this tournament being top heavy with amateur qualifiers; the big boys are starting to flex their impressive muscle. Ole Schemion leads the field with 1,534,000 chips, but Toby Lewis (973,000), Sam Trickett (805,000), Mathew Frankland (701,000) and Dave ‘Devilfish’ Ulliot (700,000) are all well poised to make a break for it as we play down to the last few tables.