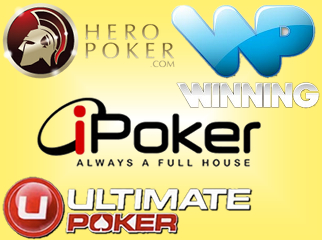 Playtech’s iPoker network has promised its skins a software update featuring ‘Heads Up Hogging Prevention,’ a background tracking system iPoker claims is intended to restrict the ability of players to occupy seats at multiple tables without actually joining in the reindeer games. The stated goal is to keep the poker action “flowing smoothly” while ensuring that it’s fast and “fair for everybody,” but further hogging prevention details are scant.

The Winning Poker Network (WPN) has decided to take the opposite route, bundling the ability for multi-tablers to sit out at one or all tables into the software update the WPN rolled out earlier this week. The former Yatahay network has also totally redesigned its lobbies for enhanced navigation and promised “radically redesigned” tables and new cash game filters.

Nevada-licensed Ultimate Poker is planning a VIP program under which rake points will be allocated via a ‘winner takes all’ system. In a post on the 2+2 forum, Ultimate Poker’s Director of Operations Terrence Chan told players the plan was “to reward the weak players who go to showdown often and keep them in action. Nits need not apply.” The VIP program will consist of 10 tiers, eight calculated monthly and two on an annual basis. The program will be rolled out when Ultimate Poker releases version 2.0 of its software. Earlier this month, the Nevada Gaming Control Board announced that Ultimate Poker had successfully completed its state-mandated 30-day field trial, marking yet another Neil Armstrong moment for the state’s first locally-licensed online poker operator.

Finally, Hero Poker CEO David Jung has provided an update on his efforts to relaunch the site. Hero shut down in December after Jung notified players that he and the site’s network partner Merge Gaming “weren’t going the same direction any longer.” Jung didn’t have much in the way of specifics to tell the 2+2 crowd, only that the site would be back online before the end of the year. However, Jung warned that the new Hero would not be open to US players. Jung said this decision was “the only option at this point if a business is serious to be around in this industry in ten years time.” Jung promised a further update as the calendar creeps closer to go-time but warned it could be a few more months before he had any concrete info to relay.

Anarchy at Americas Cardroom as DDoS attacks continue into the week
Lee Davy
2 May 2018
.