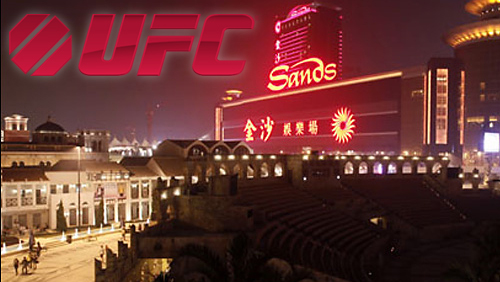 The Ultimate Fighting Championship is set to expand on its global reach after announcing a multi-year deal with Sands China to bring live UFC events to the casino operator’s resorts in Macau and Singapore.

As part of the agreement between the two companies, the UFC will hold live events at the Venetian Macao and the Marina Bay Sands in Singapore beginning next year. In addition, the UFC also announced that it would be spinning off its popular Ultimate Fighter reality show with the very first Chinese version – Ultimate Fighter China – featuring the best  Chinese mixed martial artists in the world.

This deal isn’t actually the first time the UFC has gone east to hold a live event. Last November, the UFC held its very first event in Macau with “UFC on Fuel TV: Franklin vs. Le”. The event was a resounding success for the organization, especially after seeing hometown hero Cung Le dispatch former UFC middleweight champion Rich Franklin in the first round courtesy of a vicious knockout. That event not only opened the eyes of the Chinese people to top caliber mixed-martial arts action, but it also showed the UFC that the region is primed and ready to receive the the world of MMA with open arms.

“We’ll be bringing at least one live fight event to the Singapore Marina Bay Sands, with the first one coming early first quarter next year,”  Mark Fischer, the UFC’s Asia chief, told Reuters. “We’ll have well-known fighters on the main card but we want to fill the card with more Asian fighters. We really want to build a base and…create more relevance with local audiences.”

The UFC understands that its foothold in the Asian region is still in its infancy, hence it’s taking a calculated approach in trying to tap into the market. The company hopes that Ultimate Fighter China will be the same kind of watershed moment for Asian MMA the same way the very first Ultimate Fighter did to the organization when it was teetering in bankruptcy.

“We are still at the investment stage but we do see tremendous long-term potential here,” Fischer noted. “In terms of making money, I’m sure Asia is going to be very fruitful but right now we still consider it a building phase, but this is a huge step in that build.”

For Sands China, the deal with the UFC was a pretty easy one to make in light of the successful event it hosted last year. Always looking for alternative entertainment options for its massive clientele in the region, signing a multi-year deal with the UFC is right in line with their goal of giving its customers a true must-attend spectacle that none of its competitors can boast of.