A Glimpse Into The World of Matt Marafioti

A Glimpse Into The World of Matt Marafioti Audio

When you see Matt “ADZ124” Marafioti walking down the halls of the Rio you can’t help but start rubbing your hands. There’s never a dull moment when this boy is in town. Never. Controversy follows him wherever he goes, and he is a poker writer’s wet dream. Just turn on the Dictaphone, ask him a question then sit back and take in the tales. 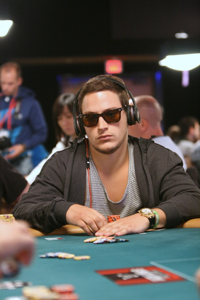 He’s not alone when he stops to talk with me. He’s being filmed for a Reality TV show. Now I’m not a big fan of this genre, and neither do I own a TV. But I might just buy one to watch a Reality TV show that is starring ADZ. It would be both interesting and absolutely hilarious. The man is made for TV.

He tells me that he is down about $140k during the series, but he did lose a chip lead flip with 80 left in the One Drop.

“Not a great feeling, but it was a standard hand.” He tells me before describing an encounter he had just recently had with an opponent before the break in the Main Event.

“I have about 240k now, but I was up to 270k at one point. I had to fold pocket kings in a three-bet pot when the board ran out with a straight. I actually had the top straight, but the player bet 100k into a 15k pot. He told me he had a set of queens, or jacks, but that doesn’t make sense. He was trying to tilt me and I’m not going to fall for these antics and this stage in the tournament. I asked him to show me one card but he declined and said I was too good.

“During the hand I got into an altercation with another player who had just arrived. It was a great table with everyone having fun until this player arrived. He shows up and not only tells me that he plays more tournaments than me – which seems impossible because I didn’t know who he was – but also calls the floor during the hand to ask if my hand is dead, because I told the player I was holding pocket kings and I was probably going to fold. I told him to stay quiet during the hand, and that he could say what he wanted when the hand was over. He said you need your head checked and that I was lucky we were both in a casino. So I said no you’re lucky we’re in a casino you dumb motherf**ker. It ended with the floor coming over. I called the guy a f**king monkey and we both ended up having three hand penalties; over a hand he wasn’t even in.”

These are the types of scrapes that follow Marafioti around the felt. One of the reasons I like the Canadian is because he doesn’t seem to have a filter when it comes to words that pour out of his mouth. If you rile him he will go on the attack and it can be bloody. But when you are prepared to live life the way Marafioti does, I ask him if he has to accept that these sorts of issues are going to happen with complete strangers all looking to take a pot shot?

“Of course, but I try not to take things too seriously. My name has been slandered so badly for things I haven’t done, but i’ve accepted that I am one of the biggest names in poker. Whether I am the best, or not, is a totally different issue. But I am one of the biggest names in poker. Everyone knows who I am and follows my Twitter feed. I try not to let it bother me and instead focus on being genuine, real and always try to tell the truth. There’s no point of focusing on negative people. If I have an issue with someone I go up to them and resolve it. When it’s done, it’s done. No grudge held. I feel a lot of people have nothing better to do with their time, they’re resentful, want to be in the position that I’m in and this is they’re way of acting up.”

Three people who ask if they can have their photograph taken with Marafioti interrupt the interview. He duly obliges and continues to talk to the three of them as they ask him how his series has been. The Reality TV cameras keep on rolling and I leave the lad in his element. I’ve got my little story, and I’m sure there will be another one the next time I bump into him.