The World Series of Poker (WSOP) Main Event suddenly feels like one big happy family. No more of this split second starting flight nonsense. Instead the remaining competitors will come together under one roof as they continue to search for the elusive first prize of over $8m. It is of course Day Three of the WSOP Main Event. 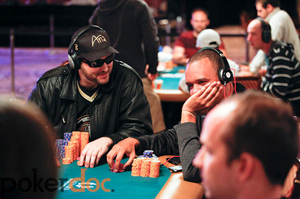 Yesterday saw the remnants of Day 1C return to the felt to put on an incredible shrinking act. Mark Kroon started as the chip leader and to his credit that’s exactly the way he finished. The field contained some of the biggest stars in world poker, so credit where credit is due Mr. Kroon; who ended the day with 507,300 chips.

Daniel Negreanu, Phil Ivey, Phil Hellmuth and Calvin Ayre’s interview guest, Tobias Reinkemeier just a sprinkling of big names to sit down and take their seat during Day 2C. After deciding not to show up on Day 1C, Tom Dwan did emerge from his cash game at the Aria to continue to play with his 18k or so chips, but lost his race within three hands and no doubt headed back to the Aria for a real game of poker.

Two former champions joined Dwan on the rail. Jamie Gold and Joe Hachem will not be making a return journey to the top of the WSOP mountain. And remember the conundrum that the Spanish and Barcelona center back may have had should he have made it through to the November Nine? Well the Barcelona coach, Tito Vilanova, needn’t worry anymore as Gerard Pique lost his vital flip against James Alexander to bust just before the dinner break.

So are we going to have the impossible at the WSOP Main Event? Will Mark Kroon go wire-to-wire? After finishing 25th in this years seniors event (from a field size of 4,400) he certainly knows how to manage his stack, but there are some decent wedges that will be looking to surpass him that include the likes of the Day 2A/B chip leader Nick Schwarmann who has 413,600 at the time of writing, Michael Mizrachi with 394,600, Christian Harder with 304,500, David Benefield with 261,100 and Yann Dion with 348,200.

Phil Ivey, Phil Hellmuth and Doyle Brunson will also be in the Day Three field. But Daniel Negreanu will have to wait until the WSOP reconvenes in Paris if he is going to win the WSOP Player of the Year award. Kid Poker did not make it through the Day 2C action.