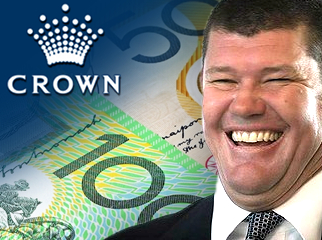 Australian casino operator Crown Ltd.’s bid to open a Sydney casino has made it to the third stage of the approval process, meaning Echo Entertainment’s current monopoly will most certainly end in 2019. In making Thursday’s announcement, New South Wales premier Barry O’Farrell stressed that Crown had yet to receive permission to build anything, but barring Crown boss James Packer (pictured right) deciding to erect a 50-foot naked statue of himself in the casino’s façade, Crown’s Sydney casino appears to be a virtual lock.

O’Farrell said a committee tasked with vetting Crown and Echo’s competing proposals determined that Crown’s bid offered contributions to gross state product and tax that exceeded Echo’s bid by 26% and 31% respectively. But businessman (and Packer wedding guest) David Murray, who headed the committee, said the decisive factor in choosing Crown was the opportunity to inject a little competition into the market. O’Farrell described competition as “a driver to encourage people to sharpen pencils, to work harder and to attract greater business.” (To which everyone under 20 said: “What’s a pencil?”)

Crown’s casino in Sydney’s Barangaroo development will be VIP-focused, with no video poker (pokies) machines, no low-limit tables and strictly members-only. O’Farrell said the casino would pay a 29% tax rate, a notch above the 27.5% Crown had offered to pay. Crown is also tasked with delivering a minimum of $1b in license fees and gaming taxes in the first 15 years of the casino’s operations.

The decision brings to a close a long and at times bitter battle between Crown and Echo, whose competing proposal involved spending $1.1b expanding The Star casino into a full-fledged integrated resort if its monopoly was extended beyond 2019. Echo had also offered the NSW government $250m if it would add 15 years to the duration of its monopoly, but few observers ever seriously doubted Crown’s chances. Shares in both companies were halted Thursday as rumors spread of Crown’s victory and investors panicked/celebrated accordingly.

Packer’s Crown is looking a little extra polished at the moment. Earlier this week, Sri Lanka confirmed that it had sold Crown’s local partner a lease on some prime real estate in the capital Colombo on which the pair want to build Crown Complex, a $350m casino and entertainment hub. Rank Holdings, which plans to transfer its Stardust Casino gaming license to the new joint venture, has agreed to pay Rs2.78b (US $21.3m) for the property. The land is situated in an exclusive gaming zone as delineated under the terms of Sri Lanka’s 2010 gambling legislation.