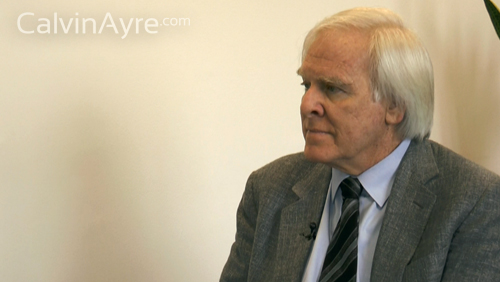 Professor I. Nelson Rose is a lawyer, a teacher, an expert witness, a writer, a speaker, a consultant and one of the world’s greatest authorities on gambling law.  Rose was recently in London attending the International Association of Gaming Advisors’ annual conference and was able to visit CalvinAyre.com’s London office to share his insight on Nevada online gambling law. Checkout Part 2 and Part 3 Interview here.

We started off the discussion by covering the current state of affairs in Nevada.  Rose confirmed that you can play legal, state licensed internet poker in Nevada so long as you’re physically in Nevada but the big question is how to get enough liquidity.  He said, “Can Nevada, New Jersey and Delaware make agreements so they can get enough liquidity for poker? And also, can Nevada make agreements with England? Because then you could get another seventy million people”.

Gaining enough liquidity all boils down to interstate (and international) compacting and how to make it all happen.  Rose explains that Nevada is interested in taking players from other states and countries where online gambling is legal. Rose confirms that according to US law, Nevada (or any other US state for that matter) does not need an agreement with countries where online gambling is regulated before accepting players from those countries.  England is a good example of one of those countries.  “As long as its legal on both ends, it doesn’t violate any federal law”, he said.

The interesting point to note here is that while Nevada can take players from outside the US where online gambling is regulated, the same doesn’t work in the reverse unless the foreign country actually has a license in Nevada.  And getting an interactive gambling license in Nevada is no easy feat- the process is just as rigorous as the land based license procedure and its very expensive.

When asked if Nevada based online gambling companies will apply for a license in the UK before accepting players from the region Rose responded with, “Well, that’s the big question”.  He believes its best to at least make an agreement because both jurisdictions can then decide on who gets the taxes and sort out any differences in regulations.  He says the bigger issues will be for those companies who are licensed in one place and not the other.