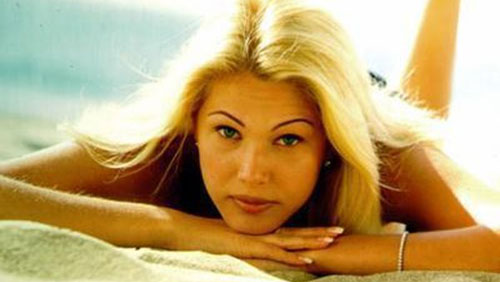 It’s hard to concentrate on poker with this much flesh tottering around the place. It’s little wonder they call it the Pleasure Pit, and tonight there’s a special treat for the dirty old men as Planet Hollywood plays host to the annual Miss USA beauty pageant; meaning there’s world peace dripping from some of the tastiest looking mouths in the business. 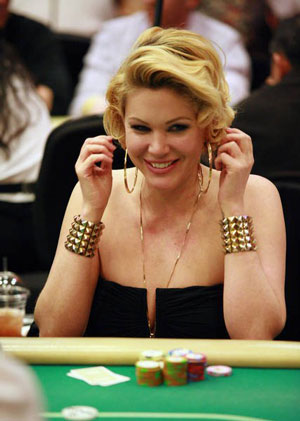 “I am not going to tell you again…English only at the tables.” Says the Dealer.

“We are speaking English…it’s the only language we know and we fucking invented it mate.” I tell the dealer for the one-hundredth time.

The bilingual argument ceases as one of the Barbie dolls gets lost in the procession and ends up seated at our table. The lads sit up in their seats, breath into their hands to check the freshness, straighten their hair and start to stare at her tits. Being a woman in the world of poker must be a right bitch. Being a woman in this room, with this much testosterone flying around is just plain dangerous.

But this Californian girls can take care of herself. She has a little peach number that shows the slender frame of her right shoulder. Her long slim legs get lost in a pair of knee length red boots that do nothing to compliment her dress. Her hands show the signs of age and there is a lack of polish and ring. Her lips look like they have been stung by a bee and she is of course blonde.

“I am a mentor for the contestant from Nevada that entered the Miss USA contest,” she said as she answered one of the thousand questions that poured out of the open mouths of the fish.

Several questions later and we establish that the lady in the one seat was once a former Miss USA, when in 1995 she was handed the title after the initial winner, Chelsi Smith, won Miss Universe. I guess that’s how bad I was running. Not only did I get it in good, and lose, aces versus kings, but I also get Miss USA on my table instead of Miss Universe…fml.

Ms ‘kinky red boots’ is called Shanna Moakler. Now that name might ring a bell for an American, but it means sweet FA to four lads from the Welsh Valleys. Within no time she was met with a barrage of requests for photos from her Miss USA days. She duly obliged before the entire table stopped breathing as she flicked her tongue over the piece of lime that was stuck in the top of her Corona.

“You look like you’re a playmate,” said one of the voyeurs after the lime dropped with a fizz.

Her answer was met with laughter as the guys around the table begged her to show us a photo of her days as a playmate as well as the Miss USA piccy.

“Just Google it,” she said.

And so we did. Holy fuckballs. Moakler in nothing but her baby suit and as the mobile phone was passed around the table for each player to get an eyeful of her full glory she just sipped her beer with a look of pride about her light colored face.

The professional poker player John Eames entered the fray and was introduced to Shanna Moakler via her naked photograph…the poor boy didn’t know where to look. As the game continued, one of the players told us that she was once married to the Blink-182 drummer Travis Barker.

Images of Moakler’s carefully trimmed bush were replaced by Barkers savage attack on the drums as my friend showed me a YouTube clip of the star.

“What…he only lasts two minutes?” Said my friend referring to the length of time it took for the YouTube clip to end.

“I was married to him for ten-years. That man was good in bed.” Said Moakler.

I liked the girl. She obviously didn’t have much of a clue how to play poker. After all, she nailed the nut flush draw with two other players also holding flushes and over-excitedly checked back the nuts on the river. But she was garish and answered any question that we threw her way. She told us that she had been single for a year, had three kids, was here with her gang that included a gay guy and wanted to live every day to the fullest after her former beau was nearly killed in a plane crash a few years back.

A few moments later and a dead ringer for Mickey Rourke sits down and starts talking to our beauty in the one seat. With my gay-dar always in motion I assumed it was her gay friend that she alluded to only moments earlier. How wrong I was…it turns out that the Mickey Rourke look-a-like was none other than Vince Neil, the lead singer of Motley Crue.

So here I am sat in the middle of a Barbie convention, with world peace spilling into my ears whilst playing $1/2 No-Limit Hold’em with a former Miss USA and a musician from one of the most famous heavy metal bands on the planet. A musician who had the most perplexed look on his face as my drunken friend insisted on telling him that his guns were not toys and they were not to be trifled with.

“I don’t like men with muscles. I prefer tall and skinny men. Confident men.” Said Moakler.

When she spoke everyone went quiet and hung on her every word. Everyone except my mate David who said: “Give me that phone. I’m going to the toilet to talk world peace with Miss USA.”