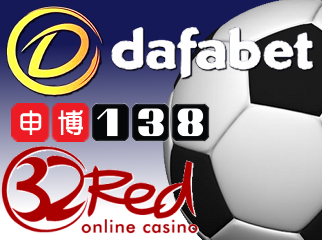 Gibraltar-licensed online gambling operator 32Red has inked a pair of UK football sponsorships, although they won’t match the profile of the company’s four-year sponsorship of Premier League outfit Swansea City, which wound down last month. 32Red has inked a one-year shirt sponsorship with Newport County, which won elevation to League Two status in May. Newport County CEO Dave Boddy called the deal a “massive step forward” for his club, and hoped other national brands would come calling.

32Red has simultaneously inked a two-year deal with League One outfit Crawley Town, whose commercial manager Ewan Dunlop looked forward to “a long and fruitful relationship” with the betting firm. 32Red’s marketing chief Mark Quayle said he hopes the company’s “lucky sponsor” reputation helps both teams elevate their game in the upcoming season.

Asian-facing online gambling outfit 138.com has inked a jersey deal with the Watford FC Hornets for the 2013/14 season. 138.com is operated by Xela Holdings, and holds online gambling licenses issued by the Isle of Man and the Philippines’ First Cagayan Leisure and Resort Corporation. Garth Kimber, Xela Holdings CEO and former head of eGaming Development for the Isle of Man Gambling Supervision Commission, said he was “delighted” with the deal, which he hoped would result in “both parties achieving success over the coming seasons.”

In the week’s highest profile sponsorship deal, Asian-facing online gambling operator Dafabet has inked a two-year shirt sponsorship with Premier League club Aston Villa. Dafabet, which is owned by the AsianLogic Group and holds online gambling licenses issued in the Philippines and (via AsianBGE Ltd.) the Isle of Man, has previously inked international betting partner deals with Everton and West Bromwich Albion. AsianBGE managing director Dimitris Karatzas said those previous deals had demonstrated “the increased potential of becoming an official club sponsor.” Karatzas is sure fans will appreciate the new Aston Villa kit, which will be introduced this weekend at a two-day music festival at Villa Park.

It’s worth noting that none of the above companies hold licenses issued by the UK Gambling Commission. Under the UK’s new Gambling (Licensing and Advertising) Bill being debated in the current session of Parliament, only UK-licensed firms would be permitted to advertise in the UK, including on the jerseys of sports clubs. But given the plethora of Asian-facing gambling firms that have struck similar deals with UK football clubs, it’s likely that the Premier League itself will lobby to have the Bill amended to allow firms that agree to restrict UK customers to go on making such deals. Which will be just fine with Asian-facing firms, who have little interest in fighting for crumbs in the oversaturated UK online market, and only signed such deals to increase their visibility among Asia’s football-mad bettors.