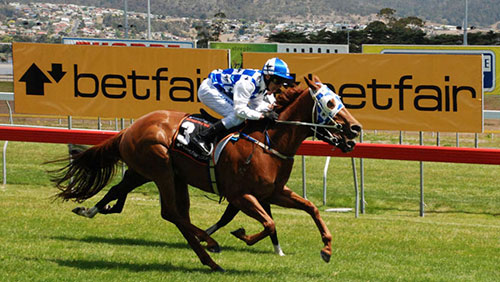 Betfair continue to aggressively market the major sporting events after their Australian sector agreed a three-year deal for the naming rights of the Tasmanian Summer Racing Carnival.

Betfair might like to ‘cut out the middle man’ but it appears it’s in no mood to cut out its aggressive pursuit of the marketing of sports events, after securing the naming rights for the Tasmanian Summer Racing Carnival in Australia.

The betting exchange and online casino operator Betfair Australia has signed an exclusive three-year deal that will see them become the flagship for the most popular horse racing event down under.

In addition to the newly christened ‘Betfair Tasmanian Summer Racing Carnival,’ the company founded in 2000 by Andrew Black and Ed Wray, will also have it’s name signposted onto the premier events of the carnival: The Holbart Cup and Launceston Cup events.

“As a proud Tasmanian, we leapt at the opportunity to partner with the Tasmanian Summer Racing Carnival,” said Giles Thompson, chief executive officer for Betfair Australia.”

Betfair Australia announced that revenue was up 13% on higher commision rates during the fiscal quarter ending Jan 31st, after the business had decided to pull out of countries such as Cyprus, Germany and Greece – so called ‘grey markets.’

“Betfair is obviously a high-profile international organization and we are delighted that it has partnered with our thoroughbred carnival in this way,” said Brian Speers, Chairman for organizer and regulator Tas Racing.

“Through the partnership, Betfair will continue to help place the national thoroughbred racing spotlight on Tasmania during the summer months. It is also a strong vote of confidence in the Tasmanian thoroughbred product and sends a clear message of support to our other sponsors and stakeholders regarding the state of our industry.

“The 2013 Tasmanian Summer Racing Carnival benefited from increased wagering turnover and strong participation from inter-state owners, trainers and jockeys. More than $1.2 million or 64 percent of carnival prize money was won by Tasmania-owned horses. This was a strong result for the thoroughbred industry in Tasmania and a very real demonstration that Tasmania-owned thoroughbred horses can compete against quality horses from inter-state.”

Gambling houses have increased their interest in the promotion of sporting events in recent years, and Betfair have been one of the companies at the forefront of that chase. Sporting events and gambling will always be inextricably linked, and to have their brand name in the eyeballs of the sporting clientele is good business.

Betfair recently sponsored the World Snooker Championships at the Crucible – an event that saw Ronnie O’Sullivan win his fifth world title after a yearlong hiatus from the game, and Betfair were also the sponsors for the recent rematch that saw Carl Froch avenge his defeat against Mikkel Kessler adding the WBA belt to his IBF strap.

The announcement of the deal is much needed positive news for the Australian arm of Betfair after they recently pleaded guilty for breaching Victorian state law, after using promotional pitches to lure punters into their online world with the offer of a free bet or two. Coincidentally, the charges relate to a promotion that took place during 2010 Spring Racing Carnival. The company received a 12-month non-conviction bond by Magistrate Phillip Goldberg.