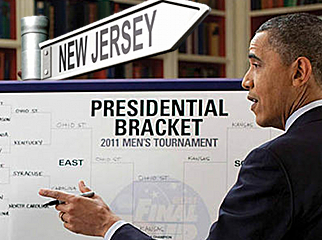 National Football League commissioner Roger Goodell confirmed this week that the league will play two regular season games in London’s Wembley Stadium in 2013, and perhaps three games in 2014. This, despite (a) the presence of 30-odd betting shops within easy walking distance of Wembley and (b) the NFL’s insistence that it will never hold so much as a preseason game in Nevada, the only US state in which single-game sports betting is legal. (More on this hypocrisy later.)

The NFL closed out its week by working to ensure that the rest of America can’t legally enjoy Nevadans’ freedom. Friday was the deadline for the NFL, three other pro sports leagues, the NCAA and the US Department of Justice to respond to New Jersey’s bid to overturn the PASPA federal sports betting prohibition. (If you’re just joining us, New Jersey legalized sports betting, the leagues and the DOJ successfully sued to stop the state, who are appealing their defeat. And here we are.) The NFL et al were supposed to submit their response to New Jersey’s latest filing with the Third Circuit Court of Appeals on May 23, but one of the DOJ lawyers had a nasty bicycle accident and the Court granted them an extension.

As ever, NorthJersey.com’s John Brennan was first to grab a peek at the 71-page filing, To anyone who’s been following this lengthy back and forth, many of the arguments set forth by the NFL et al will seem awfully familiar. Among them is that New Jersey is a bunch of hypocrites for passing sports betting legislation that bars wagering on collegiate events staged within state borders. (Dear NFL: please reread the Wembley thing, contemplate the glass house in which you currently reside and put down those stones.)

On the issue of standing, the leagues argue that they don’t need to demonstrate actual harm that might befall them from legal sports betting outside Nevada; they consider it sufficient that New Jersey’s actions have the potential to malign the good name of their product. As for the issue of PASPA’s preferential treatment of Nevada and the three states that ‘enjoy’ neutered sports lottery products, the leagues remind the court that New Jersey was the only state given a one-year window in which to decide whether it wanted the same sports betting rights as Nevada. The state is “particularly poorly positioned” to argue about preferential treatment when it itself “was singled out in PASPA for more favorable treatment.” Touché.

New Jersey and its allies will now have until next Friday (14) to submit their final reply before the two sides square off in person on Wednesday, June 26 at the court in Philadelphia. The parties have been given a combined 30-minute window in which to make their respective cases to the justices. Regardless of how the fight goes, the losing party is a lock to appeal the ruling to the Supreme Court.

SPORTS BETTING MOVES OUT OF “DEGENERATE SPACE”
The notion that sports betting is too big to be contained within Nevada’s borders was a hot topic at last month’s International Conference on Gambling & Risk Taking in Las Vegas. Chad Millman, editor of ESPN the Magazine, thinks the Supreme Court mulling the merits of sports wagers would have “a huge impact over the next few years in the way that we’re having a conversation about sports betting.” Millman says that conversation is shifting from “the degenerate space” to the political space.

Case in point: the recent video of President Barack Obama filling out his March Madness bracket, a sight that Millman believes has helped project a “more sanitized” view of sports betting. Millman believes EPSN can play a role in this debate by approaching sports betting the way many of the conference attendees do: “from an intellectual, analytical research perspective.” While filling out his bracket, Obama said “all of America has a stake in these games.” All of America needs to realize it also has a stake in New Jersey’s legal quest.