CasinoCheck and the Burdon of Expectation 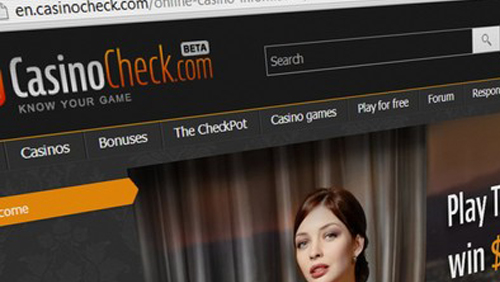 Being a younger sibling is tough. Having to emerge from the shadow of a successful elder and living up to their high standards presents just as many problems as opportunities. Ask Eli Manning. Ask any of Alec Baldwin’s younger brothers. Even King George VI would have attested to the fact that while doors may open initially, ensuring that you pass through them in a suitably successful manner is something of a challenge.

It’s a challenge that faces the team behind the new casino affiliate site CasinoCheck.com. This site is one of the latest projects to be launched by Etruvian – the company founded by Dominik Kofert on the back of the monumental success of PokerStrategy.com. In just five years the poker school and community accrued more than six million members and is now available in 19 different languages. Such is the volume of its success that the site employs 200 full time and more than 500 freelance staff. As benchmarks go in online gambling, it’s not really possible to get any higher.

Having taken their domination of the poker affiliate market just about as far as it’s possible to go, Kofert and his Etruvian team have taken on more projects. PokerStrategy.com’s Education Community Framework is now available on a white label basis; tradimo has been created in-house to educate about financial trading while feelgood is doing the same thing with nutrition and health.

Closer related though is CasinoCheck.com. For the team working on CasinoCheck.com, it’s important to be realistic and know that the chance of emulating the success of PokerStrategy.com is highly unlikely admits project lead Hannes Hanusch.

“CasinoCheck.com starts under very different conditions in a gambling market that has matured substantially over the last years,” he adds.

“We can’t expect to dominate the rankings in the search engines in a short period of time and therefore need to build a brand and product that players are actively looking for. “

Not your normal start-up

When questioned about the added pressure caused by being so closely related to PokerStrategy.com, Hanusch provides the type of answer that every boss would like to hear – that rather than feeling external pressure, it’s the pressure put on the team by themselves that is felt the most.

He says: “The pressure doesn’t come from the fact that PokerStrategy.com is so successful, it comes more from the fact that we want and need to build a great product that adds so much value to users that it can grow continuously and become a profitable business.”

Hanusch also refers to CasinoCheck.com as being ‘a bit like a typical start-up company’ which isn’t entirely accurate – certainly not as a start-up iGaming affiliate anyway. Like PokerStrategy.com itself, most began in their founders’ bedrooms with little cash flow and teams that could be counted on one hand. Few had the finances to buy a sponsored post on PokerFuse or the connections to inform a poker community’s six million users about the site – both of which are tactics already employed by the CasinoCheck.com team.

Perhaps these are the kind of resources needed for a new casino affiliate to break into what are now fairly mature markets. The site launched in three languages – English, German and Russian – with the countries where those languages are spoken being targeted. Hanusch is well aware of the competitive nature of this markets and it’s because of this that he’s clear about the key factor to CasinoCheck.com’s success. As he puts it, the site’s “only chance really is to find things that haven’t been done before”.

Attempts to do new things are evident across the site. Efforts to maintain the educational theme running through Etruvian’s projects can also be seen in the Forum and CasinoPedia channels but given the dominance of luck over skill in casino games, teaching players how to play them is less of a draw. As such the approach which helped PokerStrategy.com succeed will only get this site so far.

New ground and the missing piece

“We felt very strongly that it would only make sense for us to enter the market if we could offer something that no one else has,” Hanusch explains.

“We needed something that in the best case would make users actively decide to play through us as an affiliate.”

In the form of CheckPot, Hanusch is hoping that he and his team have found it; in any case it’s certainly something that no one else has. The CheckPot allows players who sign up at CasinoCheck.com to earn CheckPot tickets when playing at any online casino which they go to from the site. The more a user plays, the more tickets they earn with these tickets being entered into the monthly CheckPot raffle draw.

The logic behind it certainly makes sense. The CheckPot is providing users with another opportunity to win when they’re doing something that they would have been anyway. It’s the type of promotion that could even encourage players to wipe their cookies – after all if you’re playing at 32Red then why wouldn’t you want to have the chance of earning a little bit more on the side in what is effectively an affiliate reward scheme.

But as with anything new, how well this product will be received is a mystery and something that Hanusch is looking forward to finding out.

“We have to find out whether users find this as attractive as we think it is and make amendments to it depending on the feedback we get,” he says.

“The creation of the CheckPot promotion was integral for the creation of the site and without it or something similar we would not have launched. We will also try to continuously create more unique promotions and rewards for users that make use of our capabilities of directly rewarding individual players based on their real money playing activity.”

While Hanusch and his team seem to have most areas covered, there’s still one glaring omission in the form of a mobile optimised form of the site. Rather than go with responsive design, as is the generally accepted best practice these days, CasinoCheck.com has gone live without being optimised for mobile in order to get up and running quicker.

Hannusch explains: “In general I think the conversion of mobile traffic is still an issue for a lot of affiliates at the moment as the tools from the operators available to affiliates are not very well developed yet.

Despite this Hanusch reveals that mobile will be the next step for the site and admits “it is clearly an area where we have significant catching up to do.”