Home / Poker / Herold Leads the German Charge at EPT Berlin, and Wins for Wheeler, Otto and Luske in the Side Events The EPT Berlin poker show keeps on rocking with Roman Herold in charge with just 17-players remaining in the Main Event. Away from the spotlight Jason Wheeler, Marcel Luske and Daniel Otto have picked up side event awards, whilst Aaron Lim leads the €10,000 High Roller. 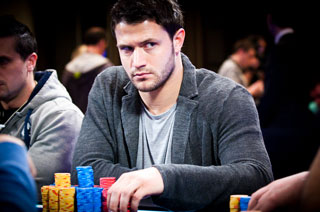 Four days of the European Poker Tour (EPT) has passed and only 17-players are in with a chance of picking up the first-prize of €880,000. An amount that once again pushes this sport that isn’t a sport into the higher echelons of prizes given out to real sports. Well you get the point.

The German nation are currently ranked sixth in the Global Poker Index (GPI) with only 4% of players positioned in the comfortable seats of the top 300, but when it comes to money won in the biggest buy-in tournaments the world gets to showcase the Germans are one of the best nations at getting the business done. The quartet of Philipp Gruissem, Tobias Reinkemeier, Igor Kurganov and Fabian Quoss are eating high rollers for fun; two-time World Poker Tour (WPT) champion Marvin Rettenmaier is the world number one (the Germans have three players in the top ten) and Martin Finger, Benny Spindler and Martin Schleich are just a few of the more recent members of the EPT winners club not to mention Ole Schemion who won the Partouche Poker Tour (PPT) and Masters Classic; then there was Wojtech Barzantny who recently won back-to-back United Kingdom & Ireland Poker Tour (UKIPT) Main Events titles.

So with all that talk of Vorsprung durch Technik it should come as no surprise to inform you that amongst the final 17-players are 8 Germans, including the chip leader with 4,485,000 ceramic discs, Roman Herold, who has just one previous EPT cash to his name. But I guess given the fact that the event is taking place in Berlin, and that 30% of the field was German, it would be expected. What was not expected is the lack of any German high quality flair. Most, if not all, of the remaining Germans not standing out as a ‘star name.’

But there are some stars still shimmering in the twilight most notably the former World Poker Tour (WPT) winner, and online heads-up elite performer, Olivier Busquet and the very popular online grinder Calvin ‘Cal42688’Anderson; or as World Series of Poker (WSOP) winner, Craig McCorkell referred to him on Twitter Calvin ‘I don’t like live poker’ Anderson. There is also a former EPT Champion in the field in the shape of Kevin Stani. The Norwegian took the EPT Tallin trophy home in 2010 and is the only player left who can become the first-ever two-time EPT Champion here at Berlin.

In other EPT Berlin news there has been a long overdue victory by the American online grinder Jason Wheeler. Wheeler moved to Mexico after Black Friday so he could continue his online grind but also decided to take a shot at the European Poker circuit; his victory in the €2,000 No-Limit Hold’em (NLHE) eight-handed event for €69,500 his first victory on European soil.

One man who knows what it’s like to win poker tournaments on European soil is the best-dressed man at the tables Marcel Luske. The member of Team PokerStars Pro defeated 118-players to take the first prize of €32,000 in the Pot-Limit Hold’em (PLO) eight-handed event.

But the biggest most recent winner was Daniel Otto who takes home €131,000 for beating 236 other players in the €2,000 NLHE event, the German beating Chris Moorman in heads-up to provide yet another ‘close thing’ for the online legend.

At the time of writing the €10,000 High Roller event that had attracted 140-players had been whittled down to just 20 with blinds at 1k/2k 300 ante. The leader was the recent WSOP-Asia Pacific bracelet holder, Aaron Lim, who is currently going through one hell of a heater. It wouldn’t be a High Roller without the German quartet showing an interest and they don’t disappoint with Igor Kurganov currently lying in third place.