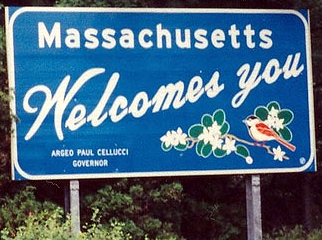 State representatives in Massachusetts have introduced an amendment to the state’s new budget plan that would permit intrastate online poker operations. While state senators have previously introduced legislation allowing the Massachusetts state lottery to take its operations online, Amendment #365 to H. 3400 (read it here) calls for the licensing of a maximum of three “internet card rooms.”

Massachusetts’ online poker license fees would be “not less than” $10m, payable within 30 days of the license being awarded. During the first two years of operation, this $10m would be credited against the gross gaming revenue fees the operator would remit to the state. Once this $10m credit is exhausted, monthly fees will be payable, although the rate of taxation isn’t spelled out in the amendment.

Failure to commence online gaming operations within 30 days of being issued a license will mean operators facing a fine of $25m, that is, should the delay be deemed to be the result of “bad faith.” There is also a ‘bad actor’ clause excluding operators who took wagers from US citizens after Oct. 13, 2006, the date the Unlawful Internet Gambling Enforcement Act (UIGEA) took effect. This is one of the more strict ‘bad actor’ clauses yet proposed, as most others chose Dec. 31 as their cutoff date.

ILLINOIS HORSEMEN UNEASY ABOUT ONLINE GAMBLING PLANS
Over in Illinois, the proposed expansion of the state’s gambling options was given a rough ride at a public hearing of the Illinois Gaming Board last week. In an occasionally bitter public squabble, critics complained that the SB 1739 legislation – which includes plans to bring brick-and-mortar casinos to Chicago, slot machines to state racetracks plus a full complement of online gambling options – is too expansive and hasn’t been subjected to necessary scrutiny.

Under the proposed legislation, a racetrack like Arlington Park would be eligible to apply for an online gambling license, but the Illinois Thoroughbred Horsemen Association (ITHA) is now voicing concerns that it won’t get a slice of this pie. ITHA president Michael Campbell reminded the Chicago Daily Herald that Arlington Park always justified its pursuit of slots by claiming the extra revenues would be shared with the state’s racing industry as a whole, but the ITHA hasn’t received the same commitment regarding online gambling. Arlington Park, which is owned by Churchill Downs Inc., has said it supports the ITHA getting its own online gambling license, but Campbell says ITHA could never afford the $20m license fee.