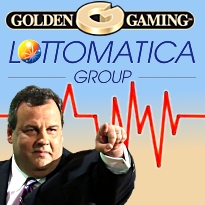 On Thursday, the Nevada Gaming Commission unanimously approved an interactive gaming technology provider license for the US branch of Italian outfit Lottomatica Group. Lottomatica simultaneously announced it would rebrand itself as GTECH, the subsidiary it acquired in 2006 for $4.7b, in a bid to further integrate its operations with US division GTECH Holdings Corp. The rebranding will be complete by the end of the year.

Also on Thursday, the NGC approved an interactive gaming operator license for Sartini Synergy Online, the online offshoot of tavern/casino/slot-route operator Golden Gaming. The Las Vegas Review-Journal’s Chris Serioty, who attended Thursday’s hearing, quoted Golden Gaming CEO Blake Sartini saying his online poker ambitions weren’t quite ready for primetime, but that he’d wanted the license so he could be “ready when it makes sense.”

ONLINE GAMING THE ONLY WAY TO SAVE ATLANTIC CITY
Wells Fargo Securities gaming analyst Dennis Farrell Jr. says online gaming could represent “a lifeline” to Atlantic City’s struggling casinos. Farrell’s research suggests that if New Jersey Gov. Chris Christie were to sign the online gaming legislation currently sitting on his desk, the resulting online market “could be almost half of the existing New Jersey gaming market’s revenue.” Farrell says that could mean $1.5b in annual revenue in five years time, which would add $150m in annual tax revenue to New Jersey’s coffers. (Overly optimistic? Hell, yeah.) Farrell believes that if AC’s casinos cross-promote the online product with their offline amenities, it would provide “significant advantage” over strengthening regional competition in Pennsylvania and New York.

State Sen. Ray Lesniak issued a statement following the release of Farrell’s report, saying “I couldn’t have said it better myself.” Lesniak said the report provided “incontrovertible proof that internet wagering is the shot in the arm that Atlantic City’s casinos need.” Lesniak said he hoped Christie would read Farrell’s report and act accordingly “to put our state’s casino industry on surer fiscal footing.” Earlier this week, Christie told a New Jersey radio audience he had doubts about the benefits online gaming could provide to Atlantic City. Christie has until Feb. 4 to make up his mind.

MASSACHUSETTS ONLINE GAMING BILL WOULD ALLOW INTERSTATE COMPACTS
The office of Massachusetts state Sen. Jennifer Flanagan was good enough to send CalvinAyre.com a copy of the legislation intended to authorize the state lottery to take its action online. As Flanagan previously stated, the bill is more a conversation starter than a definitive statement, totaling just three pages in length. The first section authorizes the lottery to determine what type of games it will offer online, while limiting it to transactions “initiated and received or otherwise made within the Commonwealth.” Section 2 authorizes “multi-jurisdictional lottery games … provided that any such lottery or lotteries conducted online or over the internet has been properly authorized by each state or other jurisdiction that is part of the group.” While this includes Mega Millions and PowerBall multi-state lotteries, it’s broad enough to permit interstate compacts with other states that pass online gaming legislation that goes beyond mere ticket sales.

Both Flanagan and State Treasurer Steven Grossman took pains to stress that nothing would be enacted that would leave the state’s 7,400 lottery retailers out of the loop, suggesting a scheme by which online credits would need to be purchased via an approved retail agent. But they’re already getting pushback from the Retail Industry Leaders Association (RILA), which queried registered voters in the 43 states that offer lotteries and determined that 78% of respondents were opposed to the concept of internet lotteries in general and 80% were opposed to allowing people to purchase online lottery tickets with credit cards. RILA senior VP Brian Dodge issued a not-so-subtle threat to lawmakers who might advocate for online lotteries, saying voters “overwhelmingly are less likely to support” such politicians.