Live reporting on poker tournaments is not as glamorous as it may seem. It’s true that I get to jet around the world; by day I get to learn from the best players on the planet and by night I get to rest in five star hotels; but the activity in itself can be rather boring and tedious. I sometimes call it folding your life away. But whenever I see the pink-haired mullet of Guillaume Darcourt I get quite excited. The World Poker Tour (WPT) champion is an extremely active player. He lives by the active sword and he dies by it too. You never get the impression that Darcourt is ever folding his life away. 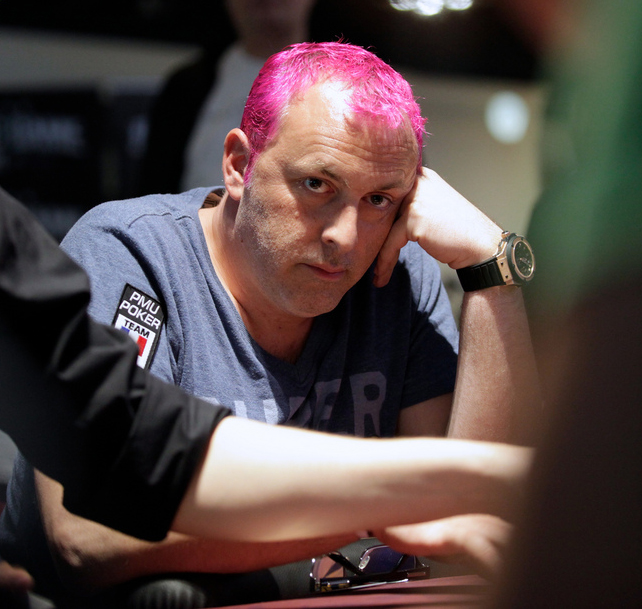 But things are tough for Darcourt, at the moment. He hasn’t picked up a live cash in the first three-months of the year and he recently fired two bullets at the Venice Grand Prix only to see them go up in smoke in double-quick time. Shortly, after this interview Darcourt sat down to play in Day 1A of WPT Barcelona and was out within the first 120-minutes. Like I said he lives and dies by that sword thing.

Darcourt has won more than $1 million in his time on the felt. He is sponsored by the gambling outfit Pari Mutuel Urbain (PMU) and has been for the past five years. But his commitments to PMU and the game in general can cause strain and stress when you have a family, like Darcourt does.

“Since April 2012 I have spend four days consecutive in my house. When you have children, a wife and a totally different life it’s very difficult.” Said Darcourt.

In our interview Darcourt talks about the mental game of poker, and how more people are turning to personal coaches to help get them through the necessary downswings that are part of the game. He also talks about PMU and his fellow teammates who all work together to take the brand to a global audience.

Let’s hope he has better luck at the tables when he fires his second bullet on  Day 1B. One thing is for sure, I will be stood at his table watching his every move.