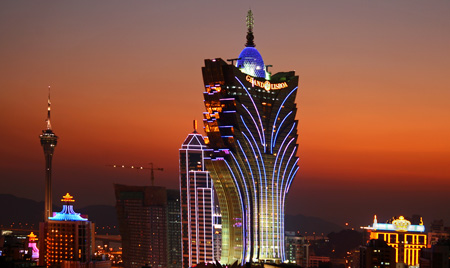 Business in Macau has been churning along in a feverish pace and the gambling town’s March revenue figures reflected as much. Yesterday, Macau’s gross revenue figures from March was released and it showed that the destination earned MOP 31.3 billion for the month, or $3.9 billion based on current exchange rates. That figure represented an increase of 25.4 percent from what it earned in the same period last year.

Today, Macau Business Daily reported that, according to unofficial market data, SJM Holdings continued to own the biggest piece of the market share pie in Macau, accounting for 27 percent of the total gross revenue, 1 percent better than what it did in February 2013. Coming in at a respectable second place was Sands China, who took home 21 percent of the market share on the  heels of strong performances from its Macau properties, including Sands Cotai Central and the Venetian Macau. Stepping on the bottom step of the podium in third place is Galaxy Entertainment, who came close to usurping Sands China for second place with an 18 percent share in Macau’s gambling market, one percentage point lower than what it earned in February.

Melco Crown stayed in fourth place with a relatively healthy 14 percent market share while Wynn Macau also remained in its place at the fifth spot with an 11 percent share. Occupying the bottom of the list is MGM China Holdings Ltd with just nine percent of the market share, one percentage point lower month-on-month.

Despite lagging in the rankings, both Wynn Macau and MGM China are expected to open new casinos in Macau’s Cotai territory. The former is already in the process of constructing its first integrated resort in the area at a price tag of $4 billion with a timeframe for completion set at four years. Meanwhile, the latter also broke ground on its new $2.6 billion casino last month with an expected timetable of finishing construction by 2016.