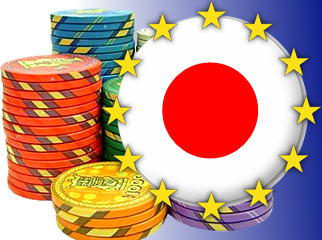 Japanese legislators are supposed to introduce their long-awaited integrated resort-casino legislation this month, but that hasn’t stopped plucky entrepreneurs from attempting to fill the gambling void. Late last month, Kangawa Prefectural Police raided an illegal casino in Yokohama that was earning revenue of ¥9m (US $97k) per day from its four baccarat tables and lone roulette wheel. The ‘Win’ club, which operated 24-hours per day, reportedly earned its operators ¥1.5b ($16.1m) since October, ¥19m of which was seized during the raid. Police have charged three employees and are seeking charges against 13 others.

A far more ambitious casino operation shut down last year before police could get their hands on the alleged mastermind. Japanese media outlet Asahi Shimbun has just gone public with an amazing story of a clandestine casino operated out of a multi-resident building in a posh Tokyo district whose alleged proprietor was a member of a European diplomatic embassy. The newspaper declined to identify the country, in part because Tokyo’s Metropolitan Police Department is still investigating the matter.

Apparently, the entire fifth floor of the building was rented under the name of the first secretary of the embassy in question, although it’s not clear whether the diplomat was a party to the goings-on. The property was rented for several years for residential purposes, but the first secretary’s place of residence was listed as a different address. The first secretary reportedly returned to his native land in early 2012, yet the ‘embassy casino’ continued operating until November, when the rental contract was abruptly cancelled.

Gamblers were required to place a cell phone call in order to be allowed through the ‘embassy casino’ doors, which were locked from the inside. Once in, patrons could enjoy gambling at two baccarat tables and two roulette stations. In August, a patron confided to a journalist that the casino had been granted “extraterritorial rights” so patrons could “have fun without worrying.” A police official would only say that their investigation was treading extra carefully, in that “one wrong step could lead to an international problem.”

Frankly, it’s a bit disappointing that a European embassy appears to have been behind this end-around of Japan’s draconian gambling laws, as we would have been far more likely to suspect North Korea. After all, it was just last month that South Korean newspaper Chosen Ilbo reported that the North Korean regime had provided a certain number of its embassies with pharmaceutical-grade methamphetamine to sell on the street in order to generate some desperately needed hard currency for Kim Jong-Un’s despotic regime. Each diplomat was expected to kick back $300k from their Breaking Bad wannabe antics, which, if one looks at the Yokohama casino’s average take of $100k/day, could have been accomplished in the first week if North Korean embassies had gone the baccarat and roulette route. But hey, it’s not like North Korea can be counted on to do things the easy way…