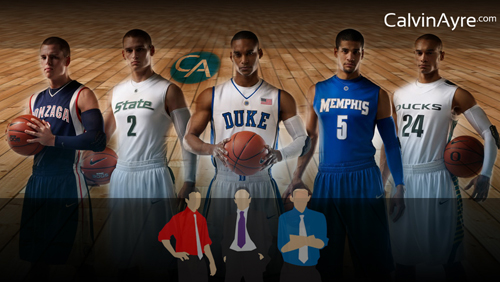 After a weekend’s worth of some entertaining, albeit a little mediocre, basketball, the NCAA basketball tournament has been whittled down to the Sweet 16. Most of the favorites are still alive and kicking but as is always the case with March Madness, the Sweet 16 also features a host of Cinderella teams, each a step closer to winning the biggest prize in all of college basketball.

Pre-tournament favorite Louisville has been nothing short of impressive in its two successive blow out wins in the first two rounds of the tournament. Vegas books have certainly been paying attention because the Cardinals are now listed at 3/1 odds to cut down the nets in Atlanta on April 8. Second favorite Indiana also retained its spot just behind Louisville with odds on the former now priced at 9/2, a significant fall from the 7/1 odds it had before the tournament.

From the two consensus favorites to win the NCAA championship, the revised Sweet 16 odds now features the Florida Gators in sole possession of third favorite at 5/1 odds after being grouped with the Miami Hurricanes and the Duke Blue Devils at 8/1 odds before the tournament started. The ‘Canes and the Blue Devlis both didn’t fall too hard though in the eyes of the books as the former is still commanding 7/1 odds to win the tournament while the latter’s odds remain unchanged at 8/1 odds, same as it was before the tournament started.

It’s hard to argue against making a pick on any of the five supposed favorites heading into the Sweet 16, but if you’re looking for some real value, Ohio State’s 8/1 odds look like  a pretty damn good deal, especially after its impressive showing in the first two rounds of the tournament. From there, four teams have been grouped together at 12/1 odds, including Kansas, Michigan State, Michigan, and Syracuse. Meanwhile, Arizona is sitting pretty as a legitimate dark horse in the competition with 25/1 odds while Wichita State, Marquette, and Oregon have all been priced at 30/1, 50/1, and 60/1 odds, respectively.

But if you’re really convinced that Cinderella will still be alive and kicking come the Final Four, it shouldn’t come as a surprise that LaSalle is still 75/1 odds to stage its own improbable run towards NCAA immortality while Florida Gulf Coast, the unquestioned story of the tournament so far is all the way at the bottom with 100/1 odds to continue its insane run that could – if the stars align – lead to its first NCAA title.