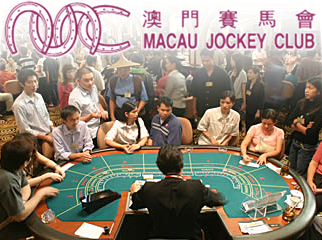 Macau’s casino revenue is off to a torrid pace in March, leading some analysts to predict the monthly revenue tally could rise anywhere from 14% to 20% over last year. Japanese brokerage Nomura said Macau’s casinos were averaging gross gaming revenue of MOP 1.1b (US $137.6m) per day through the first 10 days of the month, although they noted that this period included two full weekends. J.P. Morgan’s Kenneth Fong suggested that even if the daily tally dips back to MOP 880m per day, the monthly total would come in at MOP 29.4b, an 18% rise year-on-year.

Sterne Agee’s David Bain was a little more bearish, noting that March 2012 had the year’s second lowest VIP baccarat win rate (2.98%), so a step up was more or less in the cards (so to speak). Bain expects March will eventually show a 14% rise to MOP 28.4b, but even that would be enough for a new monthly revenue record. Also playing the role of Debbie Downer was HSBC, whose Sean Monaghan cut Macau’s expected growth rate for 2013 from 13.5% to 12%. Monaghan believes the uncertainty surrounding Beijing’s interest in the VIP market will dissipate by mid-year, but the impact will make a dent in turnover. That said, given the continued strength of the mass market segment, which offers casinos vastly greater margins than their VIP business, HSBC also raised its expected casino earnings growth from 23% to 25%.

The mass market gets a lot of respect from Rob Goldstein, Las Vegas Sands’ president of global gaming operations. At last week’s J.P. Morgan Gaming, Lodging, Restaurant & Leisure Management Access Forum in Las Vegas, Goldstein said “the most underrated part of our business is our mass table business and our slots business.” Macau Business Daily quoted Goldstein saying Sands’ margins on VIP table baccarat were in the range of 10-12%, whereas ‘premium mass’ table margins were 42% and regular mass tables topped 45%.

While it often appears as if all it takes to make a go of a gambling business in Macau is waking up in the morning, there is one dramatic exception. The Macau Jockey Club lost MOP 30m ($3.75m) in 2012, as revenue fell 19.1% to MOP 356m, according to figures released by the Gaming Inspection and Coordination Bureau. The loss was nearly double 2011’s deficit, and marks the ninth straight year the Club has lost money. (The last profitable year was 2004, the same year Sheldon Adelson took up residence in the city. Coincidence?) In order to keep the lights on, CEO Thomas Li Chu said the Club was selling an adjacent piece of property to a Hong Kong developer for between HK$3b and 4b (US $386m to $515m), some of which will go toward upgrading the Club’s facilities. The Club’s monopoly on horseracing in Macau expires in August 2015.