When Pope Benedict XVI submitted his resignation to the Roman Catholic Church, the Cardinals were well and truly caught off guard. Not so PaddyPower, who had been quietly taking bets on who would become the new Pontiff ever since Pope Benedict XVI was elected back in 2005. The betting action was nothing more than a steady trickle, but ever since the Job Centre was given their toughest task to date, the dam has well and truly burst. Money is rolling in; and it is thought that the betting will now become the highest grossing of any non-sporting event ever held. We are talking sums of money topping the $7 million mark. 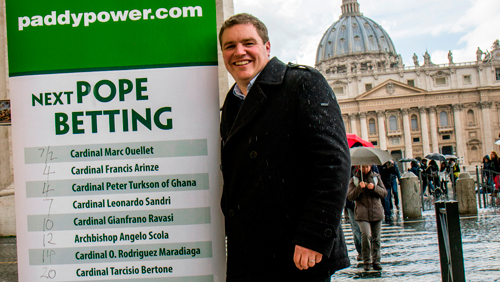 Pope Benedict XVI decided to retire due to a ‘lack of strength of mind and body’. The Pope Emeritus is 86-years of age, so to be fair, he is working well beyond the normal retirement age expected of modern man. But how does the Roman Catholic Church handle a resignation. It’s not as if they can ask anyone’s advice when you consider that the last Pontiff to resign, of his own accord, did so back in 1294 when Pope Celestine V decided that the triregnum was weighing too heavy on his head.

Most people have a notice period to work when they hand in their resignation, and its good to see that one of the most powerful positions in the world is no different. When the current Pope steps down at the end of the month, eminent Cardinals from the four quarters of the world will make their sojourn to the Italian capital, to participate in a Papal Conclave. So who has made the short list? What names will bellow around the mighty walls of the Vatican? When it comes to the release of information, the Cardinals are tight lipped, so instead we turn to PaddyPower for salvation.

The current joint favorites to wear the largest and pointiest hat known to man, are Cardinal Peter Turkson from Ghana, and Archbishop Angelo Scola from Italy, who both stand at 11/4 joint favorites. Cardinal Peter Turkson will understand the process that will take place to elect a new Pope, because he was a member of the conclave that elected Pope Benedict XVI back in 2005. If Turkson were to be the name that is pulled out of the miter, then he would be a Pope of many firsts. He would be the first black Pope and the first Pope from Ghana. Turkson is a controversial choice after causing outrage amongst homosexuals during a recent interview with CNN. When questioned on whether it was possible for the Catholic sex abuse scandal to take place in Africa, he replied that it wouldn’t happen, ‘to the same extent or proportion as we have seen in Europe.’ He then continued to dig a deep hole for himself when he said, ‘African traditional systems kind of protect or have protected its population against this tendency. Because in several communities, in several cultures in Africa, homosexuality, or for that matter any affair between two sexes of the same kind, are not countenanced in our society. So that cultural taboo, that tradition has been there. It has served to keep it out.”

Perhaps Cardinal Turkson would prefer the views of the people of Uganda, who are trying vehemently to push through the death penalty for same sex love? If an African Pope is for your liking, but you feel that the views of Cardinal Turkson are not congruent to your way of thinking, then why not take a punt on Cardinal Francis Arinze. In 2003, the Nigerian Cardinal likened homosexuality with pornography and infanticide. You can get odds of 33/1 for that wonderful man to become the next person to be paraded around Rome in a bulletproof smoking box.

If you would prefer to steer clear of Cardinals who would rather homosexuals didn’t exist, and you are the type of punter who prefers a long shot, then why not take a punt on Bono. The lead singer of the Irish rock band U2 – and all round superstar humanitarian – is a relative steal at a 1000/1.

Although i’m not quite sure if they will let him keep his shades on though?