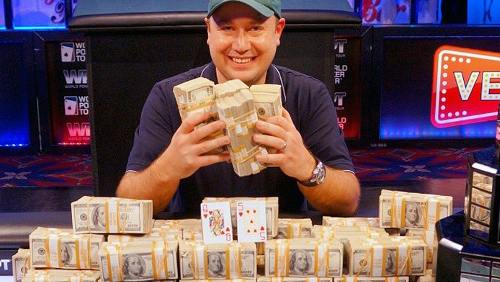 The LAPC is one of the player’s favorite stops on the WPT tour, and this was yet again represented with a field large enough to generate a seven figure first prize. 517-players entered the six day event, that started off with a moment of tenderness after Poker Hall of Famer Mike Sexton opened proceedings by delivered a fitting eulogy for the former owner of the Los Angeles Lakers, and avid poker player, Jerry Buss. Frank Mariani – a long term business partner of Buss – played in the event in honor of his great friend, in a field that saw the return of last years winner Sean Jazayeri, three-times WPT Champion Carlos Mortensen and former WSOP Main Event winner Joe Hachem.

The second day of competition saw the celebrity couple of Phil Laak and Jennifer Tilly seated opposite each other. Love went out of the window as Tilly flopped two-pair against the diamond flush of her beau. A raising war broke out with Laak moving all-in and Tilly folded face up. So the Tilly and Laak combo staved off a potential elimination, but Phil Hellmuth
was not so fortunate. The Poker Brat running a set of sevens into a set of jacks for a cooler that saw him leave the competition. 162-players finished the second day of play, with Peter Neff in the chip lead with 284,700. Other notables in contention were WSOP bracelets winners Ryan Eriquezzo, Naoya Kihara and Scott Seiver.

Day Three was payday with 63-players destined for some hard earned cash, and 99-players destined for the insides of a balloon. In was a long and arduous day that took an incredible seven levels before everyone was guaranteed at least $18,630. The British Blackbelt Poker Pro, Sam Razavi, eliminating Ario Dotson on the bubble to send everyone home for a much-needed rest. One man who would have had dreams of a title was Jeremy Ausmus. You may remember Ausmus as the fifth place finisher at this year’s WSOP Main Event for a cool $2 million. He finished the day with the chip lead sitting on just over 1 million in chips.

The fourth day of action saw the British player Toby Lewis rise to prominence. Lewis, who had recently signed with the IveyPoker.com stable, is a former European Poker Tour (EPT) Champion and highly successful online MTT pro. He finished the day with 1.8 million chips and had the likes of Naoya Kihara, Jeremy Ausmus and Paul Volpe in tow. The eventual winner, Paul Klann, made it through the day in second place.

Day Five was the journey to the televised final table and Paul Klann wanted to book his seat early. He burst out of the starting blocks to take a huge lead in the first level of the day. Naoyo Kihara was eliminated in ninth place meaning he would not add WPT silverware to a trophy cabinet already housing WSOP gold: Bruce Kramer, David Tuthill & Garrett Greer soon followed and the televised final table was set.

The chip leader going into the final table was Paul Volpe, and he was certainly the poker player’s favorite alongside the British pro Toby Lewis, if the word on Twitter was anything to go by. But it would be a case of unlucky number 13 for Lewis, as he was eliminated in the 13th hand of the competition: AT<A9 when Danny Fuhs flopped a nine to send the lad from Southampton to the rail.

David Fong was next to leave and this time it was a flip that sealed the fate of one of the top six. QQ<AK, with an ace on the turn handing the pot to Danny Fuhs and an exit to Fong. So Fuhs had eliminated the first two-players, but he was then eliminated himself. After being crippled in a hand against Paul Volpe he eventually moved all-in from the button holding Q9, Volpe called in the big blind with KJ and king-high was good to send Fuhs out in fourth. Volpe then used that headway to take the LAPC into heads-up mode. Jesse Yaginuma moved all-in with QJ, Volpe called with AT and this time ace-high was good enough for Volpe.

The heads-up encounter saw Volpe start with a 2:1 chip advantage, and an edge in experience, over Paul Klann. But that didn’t stop Klann from pulling off a David v Goliath style victory. The critical hand, in a long drawn out affair, saw Volpe move all-in with [Jh] [9h] and Klann call with [Kc] [Td]. The board steered clear of any surprises and Klann was the big chip leader. A few orbits later and Volpe was all-in again, this time with T9, and Klann was calling with Q5. Five community cards later, queen high was good and the owner of a disaster restoration company had overcome all the odds to become the latest WPT Champion – and let’s not forget – a millionaire.