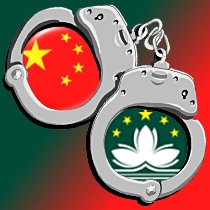 Casino companies with operations in Macau have seen their stocks plummet following a report by The Times newspaper in the UK that China is planning a crackdown on the junket operators that feed high rollers into Macau VIP casino rooms. Shares of all six Macau casino concessionaires fell between six to eight percent on Wednesday after The Times, citing unidentified sources in Chinese law enforcement, reported that junket-targeted operations would be launched in six major Chinese cities following New Year celebrations, which reach their conclusion mid-month.

Casino stocks underwent a similar slump in December after several junket operators were detained in Macau and on the mainland. After that scare, Hoffman Ma, deputy chairman of Success Universe Group, which owns the Ponte 16 casino and is a joint venture partner of SJM Holdings, said he didn’t think Beijing was trying to choke off Macau’s money supply, but that officials “just don’t want people to get away with taking too much out by using underground channels.” After a little time passed with no further arrests, it seemed to be VIP business as usual. But we’ll find out soon enough whether those popping sounds are firecrackers or gunshots.

Seen in this light, the crackdown on junkets is but one aspect of the repeated calls for a end to ‘corruption’ made by China’s incoming president Xi Jinping, who last month gave a speech in which he vowed to target both “tigers” (high-ranking party officials) and “flies” (low-level apparatchiks). But seriously, it’s hard to imagine anything to do with stamp collecting being prohibited by the state. In western countries, society punishes stamp collectors by preventing them from ever having sex and relegating them to live long, pointless lives tucked away in their studio apartments, then dying alone, unwanted and unnoticed, possibly for weeks, after which their landladies go on to sell their valuable stamp collection to pay the cost of having the apartment fumigated. The circle of life…