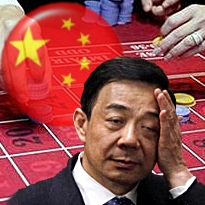 There have been no further sightings of 14K triad boss Wan ‘Broken Tooth’ Kwok-koi since his release from prison on Saturday morning. The Hong Kong Standard reported that the media staked out the Galaxy Macau hotel on Saturday afternoon while Wan was inside having lunch with his family, but Wan apparently slipped out the back before dessert arrived, giving reporters the slip. Sing Tao Daily reported there was a party of sorts at the Sheraton Macau Hotel that night attended by some of Wan’s 14K brethren, but other triad members from Hong Kong were reportedly warned by police not to attempt to show up for the soirée.

Artur Chiang Calderon, who served over 10 years in prison after being convicted of weapons possession and triad activities alongside Wan in 1999, was arrested in Macau 10 days ago over his alleged connection with an attempted murder plot on the Chinese mainland. Macau Business Daily stated that Calderon is believed to have ties to the Tongxi junket room at Melco Crown Entertainment’s City of Dreams casino, but Union Gaming Research issued a note following Calderon’s arrest stating Tongxi “likely represents only a low single digit percentage of VIP volume at the property” and thus the casino was unlikely to experience much of a dropoff in turnover as a result.

But Calderon is far from the only junket operator that’s been targeted by police in Macau and on the mainland in recent weeks. The Wall Street Journal reported that Pang Yufeng – one of four partners at junket operator David Star, which has relationships with all six of Macau’s casino concessionaires – was detained at the Wynn Macau last month and brought back to China to answer questions on some unknown topic. Another David Star partner, Qin Si Xin, was reportedly detained in China, as were individuals connected to four other junket operators.

So what gives? It was only last month that China’s outgoing President Hu Jintao was issuing reassuring statements about not rocking Macau’s gold-plated boat. Is new Party boss Xi Jinping reading from a different playbook? Jinping’s first official speech as Party leader put great emphasis on fighting corruption among party members. Yet apart from Calderon, none of the detained junket operators have officially been charged with anything.

The impetus behind all these detentions may be Bo Xilai, the former Party chief in Chongqing who took a spectacular fall from grace earlier this year after his wife was charged with and convicted of the November 2011 murder of UK businessman Neil Heywood. Once a candidate for promotion to the Party’s inner circle, Bo is now under investigation for “taking advantage of his position to seek profits for others and receive huge bribes personally or through his family.” Sources told UK newspaper The Times that the recently detained junket operators were being questioned regarding a corruption case involving “a former senior Chinese official.” Bo remains (for the moment) unindicted, and despite his troubles reportedly still retains some support within the Party, meaning that if/when the Party brass does put Bo on trial, their case against him better be rock solid. It will be interesting to see how tight they plan to squeeze the detained junket operators in order to get the info they need. You can’t get blood from a stone, but junket operators are only human.