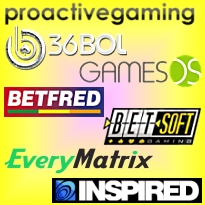 Platform provider EveryMatrix can’t stop making deals. The latest is the launch of Norskespill.com, which just went live in Norway using the GamMatrix gaming management platform. Norskespill’s players can now enjoy casino products from Net Entertainment, Betsoft and IGT, as well as take advantage of EveryMatrix’s OddsMatrix sportsbook. EveryMatrix CEO Ebbe Groes called Norskespill “a very interesting acquaintance for us,” which makes us wonder whether the two met at some gaming conference or hooked up via Match.com.

In addition to Norskespill, BetSoft Gaming’s three-dimensional slots games will now appear on Winagames.com and Onlinebingo.eu. Lee Knott, commercial director for both sites, said BetSoft was chosen not just because titles like Mr. Vegas, Three Wishes and the new Rook’s Revenge are “some of the most exciting slots games on the market across multiple languages,” but because BetSoft could provide “a stable environment for our players’ gameplay.”

Asian-facing gambling site 36BOL.com has inked a game-supply deal with turnkey solutions provider Games OS. The deal will see Games OS provide the Philippines-licensed 36BOL with Chinese-language slots, table games, scratchers and fixed-odds games. 36BOL’s site proudly proclaims that it was “named after Bet On Live,” although it’s unclear whether the site has any connection with Malta-licensed BetOnLive.com.

UK bookies Betfred have added Inspired Gaming’s Virtual Sports Betting content to its mobile offering. So when Betfred’s punters get tired of wagering on living/breathing footballers, horses and greyhounds – or, as Inspired managing director Steve Rogers points out, when the weather causes hell with outdoor fixtures – they can turn to the simulated variety. Betfred has offered the Virtual Sports Betting option on its website since 2001, but Betfred head of mobile Stuart Magowan says the company is “committed to providing our customers with more choice and entertainment wherever they are.”