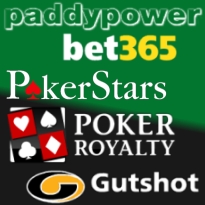 Two of the iPoker network’s top-tier members – Bet365 and Paddy Power – have closed their exclusive tables, resulting in boosted liquidity for all the poker rooms fortunate enough to make it past iPoker’s velvet rope. When iPoker made its controversial network split last autumn, Bet365 and the Paddsters retained some segregated cash game tables, which weren’t accessible by the other iPoker skins. All references to the exclusive tables on the two sites’ lobbies have been 1984-ized into oblivion, but Bet365 issued a release helpfully clarifying that while players no longer had the option of playing exclusively against other Bet365ers, iPoker “is a fun and friendly environment to play poker for all players.”

UK outfit Gutshot Poker, which left the iPoker network in a huff last April after failing to make the top-tier cut, has shuttered its player discussion forum, which for months had been inundated with complaints of non-payment. PokerFuse first noticed the forum’s absence, the murder of which may have taken place over the holidays while everyone’s attention was on gladder tidings. Gutshot currently resides on the Merge Gaming Network, the fourth network the troubled poker room has called home since going online.

PokerStars has announced a line of estrogen-friendly tournaments it’s calling the PokerStars Women’s Club. The initiative consists of four different levels – Play Money, Diamonds, Hearts and Spades – catering to players’ varying skill levels and bankrolls. In an utterly unpredictable development, Stars-sponsored pro Liv Boeree called the Women’s Club “fantastic” and noted that its small buy-in events were similar to how she got started in the online poker biz.

NBC Sports had already announced the return of its National Heads-Up Poker Championship, which will film its latest go-round starting Jan. 24 at Caesars Palace in Las Vegas. Now we learn that the first episode of the series that pits 64 of the world’s top poker names against each other in single-elimination matches will air March 19 at 9pm EST.