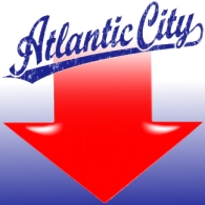 Atlantic City’s dozen casinos took in $3.05b in 2012, an 8% decline over 2011’s tally and a 41% decline from the seaside resort’s $5.2b peak in 2006. For an even harsher perspective, consider that 2012 represented AC’s sixth straight year of decline and the annual revenue haul was less than what Macau earned in the month of December alone ($3.53b). In addition to increased competition from neighboring states like Pennsylvania – which has usurped New Jersey as America’s second-highest casino revenue state behind Nevada – AC casinos were walloped in 2012 by Hurricane Sandy, which largely spared AC’s infrastructure but left many of AC’s prime customers in the surrounding areas with far more pressing issues than getting their gamble on.

Sandy was responsible for AC’s single largest monthly revenue decline (27.9%) in November. By comparison, December’s 8.9% decline to $223.5m seems positively upbeat, and higher than the 13% average decline witnessed during the first three post-Sandy weeks. December’s total slot machine win was down 8.3% to $158.6m while table game win fell 10.4% to $64.9m. Just two casinos – the Atlantic Club and the Golden Nugget – posted improved revenues in December. The Tropicana led the losers with a 40% revenue decline. Revel, which only opened in April and has struggled to gain a following, rose from November’s $6.2m to $9.8m in December, but that was still only good enough to rank 10th on the twelve-deep revenue chart.

Speaking of problematic, AC can’t be thrilled with New York Gov. Andrew Cuomo’s State of the State speech this week, in which Cuomo said he wants to add three destination casinos as “phase one” of his plan to authorize “up to seven” such gaming establishments in the state. If there’s a silver lining here for AC, it’s that Cuomo’s phase one is aiming at upstate New York, rather than New York City. That said, the state’s tribal casinos and racino operators aren’t exactly celebrating Cuomo’s announcement. Table games are currently illegal in New York, and changing that fact requires a constitutional amendment, which needs to be approved by two successive legislatures and a voter referendum. The first of these legislative approvals came last year, and assuming the second ‘aye’ vote comes this year, New York voters would be asked to give their assent in November.