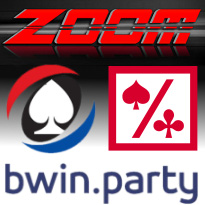 PokerStars’ fast-fold Zoom Poker product is getting the tournament treatment after Stars added a Zoom option to their tournament lobby on New Year’s Eve. The product is currently in beta mode, and thus only available at microstakes levels ($1/€1/$1.35) until the Stars techies are sure the kinks have been smoothed out. The reaction has been overwhelmingly positive, with Zoom tourneys routinely reaching their 5k player caps, which means more for Bwin.party to kvetch about in their next quarterly financial statement.

In October, PokerStars made a lot of affiliates unhappy with the news that the deal Stars made with the US Department of Justice to acquire Full Tilt Poker didn’t include an obligation to pay any of FTP’s outstanding debts to affiliates. Stars also announced that it would launch a new “joint program” for affiliates in Q1 2013. Sure enough, on New Year’s Day, the UK site of PokerNews.com announced it was welcoming FTP aboard as a ‘leading partner’ and FTP logos have also popped up on two PokerNews-associated sites: PokerWorks.com and PokerNetwork.com.

Unlikely to be displaying any FTP banners anytime soon is mega-affiliate PokerStrategy.com, which filed suit against FTP’s still twitching corpse in August over a reported $1.2m unpaid bill. Making matters worse, three days after Christmas, PokerStrategy announced the end of its partnership with the Bwin.party family of poker sites, including PartyPoker, Bwin and WPT Poker. PokerStrategy said it would continue to give StrategyPoints to existing players until the end of 2015 but wouldn’t be accepting any new signups via these sites. While the announcement was made just a month after the liquidity merger of Bwin’s poker players with PartyPoker, Bwin.party maintains that the two events are unrelated and it’s simply the scheduled end of a deal with PokerStrategy that isn’t being renewed. In July, PokerStrategy announced the similarly abrupt end of its deal with 888poker. Seriously, does PokerStrategy have cooties, halitosis or what?

A couple of signups to report: Dutch poker pro (and Team PokerStars member) Noah Boeken has signed on with poker staking outfit MyPokerSquad, which recently inked a partnership with the International Stadiums Poker Tour (but don’t hold that against them). Elsewhere, poker training site Tournament Poker Edge has signed American pro Andrew Brokos, whose primary claim to fame is a $450k payday for winning Full Tilt’s FTOPS XVI Event #25 in May 2010 and three top-100 World Series of Poker cashes.

On Monday (7), PaddyPowerPoker.com will debut the $100k Paddy’s Tournament Championship, a year-long event tracking the site’s best performers. The top player each week get $100, while the top player of the month earns $500. Along the way, high-ranking players accumulate points that will be tallied at the end of the year, with the top 200 players splitting $50k in cash and prizes. The overall point leader gets a $6k Irish Open 2014 package and their own bounty tournament.

Meanwhile, Paddy Power reps will be called to testify at a Jan. 15 Circuit Court hearing involving poker player Paul Carr’s attempts to retrieve €36k seized by the state. In May 2011, Limerick police raided the home of Carr’s friend on the (misguided) suspicion there were illegal drugs on the premises. Carr claims the money was part of the €312k he earned for placing second at the Paddy Power Irish Open in April 2010, and he’d given his friend the cash because – ironically, as it turns out – Carr was afraid people would attempt to rob his home. Despite their failure to find any drugs during the raid, the Gardai insist the cash is proceeds of the drug trade. The Counsel for the State has called Paddy to testify as to the circumstances surrounding Carr’s big payday.