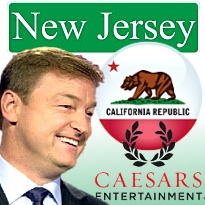 New Jersey’s state Senate has overwhelmingly approved its S1565 intrastate online gambling legislation. The bill passed Thursday afternoon by a vote of 33-3, a far wider margin than Monday’s 48-25 (with three abstentions) vote in the Assembly. Gov. Chris Christie now has 45 days in which to decide whether to add his signature and thereby enshrine it into law. Christie vetoed similar legislation in 2011, but the newly passed legislation was rejigged to specifically address Christie’s concerns about the bill’s constitutionality and a much-loathed $30m bailout for the state’s horse racing industry. Christie has been vocal in his support of the state’s sports betting legislation, but has yet to take a firm public stance one way or the other on the state’s online poker and casino plans. Should Christie opt for another veto, legislators would have the option to override it, provided they can garner 2/3 majority support in both chambers.

Frankly, we love that New Jersey rejigged its bill based on a scholarly opinion that basing the online gambling servers in Atlantic City would meet the state’s constitutional requirement for all gambling to take place within AC’s city limits. This is the same argument long offered by international online gambling sites – namely, that the actual gambling takes place where the servers are located, not where the bet originates. Online gambling is the same as someone in Trenton giving someone else $100 along with instructions to drive to AC and slap that C-note down on a roulette table. The bet is considered to have taken place when that C-note hits the gaming table, not when the instruction is given in Trenton. One can only hope such common sense sets a precedent for other jurisdictions to follow.

Thursday’s vote will be applauded by online poker titan PokerStars, which hopes to capitalize on New Jersey’s bid to eventually become a ‘hub’ for a US-wide regulated market. PokerStars is reportedly close to a deal to acquire Atlantic City’s struggling Atlantic Club casino-hotel, which could enable Stars to re-enter the US market, assuming the acquisition passes muster with New Jersey gaming regulators. No dummies, PokerStars is already on the ground winning hearts and minds. The Poker Players Alliance’s Rich Muny posted a notice on Pokerati.com that the PPA was in New Jersey on the weekend, delivering hundreds of fleeces, hoodies and other warm winter garb to families still suffering in the wake of Hurricane Sandy’s havoc. The clothing was donated by none other than PokerStars.

CALIFORNIA HERE WE COME… AGAIN
Elsewhere on the intrastate front, California state Sen. Rod Wright has reintroduced his online poker bill (read it here) which, outside its new designation as SB 51, is largely unchanged from the version released earlier this year that failed to win the hearts and minds of the state’s Indian tribes. Chief among the tribes’ objections was the license eligibility of the state’s advance deposit wagering operators, which have no history of offering poker, unlike the state’s card rooms and tribal casinos. Unlike New Jersey’s new bill, Wright’s bill has retained its ‘bad actors’ clause, precluding the participation of any company that took wagers from US citizens after Dec. 31, 2006, informally known as the ‘date by which we’re reasonably convinced Bwin.party co-CEO Jim Ryan had left his role as head of Ultimate Bet’s parent company Excapsa’.

HELLER’S FAVORITE MONTY PYTHON SKIT? ‘BRING OUT YOUR DEAD!’
For the record, Caesars has no interest in confining its online poker play within Nevada’s borders, but the failure of Senate Majority Leader Harry Reid to pass federal online poker legislation has shut the door on that idea, at least for 2012. Or has it? On Thursday, Politico quoted Nevada’s other senator, Dean Heller, saying all was not lost. “If you listen to Harry, it’s dead. I don’t believe anything’s ever dead around here. I keep telling my side if it happens, it’s going to happen quick.” The consensus appears to be that this is little more than a continuation of the public posturing that has gone on between these two, each seemingly intent on saddling the other with being listed as the cause of death on the poker bill’s post-mortem.

That said, never say never, and the National Indian Gaming Association issued a statement suggesting it too wasn’t buying Reid’s public statement as to the poker bill’s demise. Noting that the circulated draft of Reid’s bill “ignore[s] the more than 30 years of tribal government experience in regulating and managing gaming operations”, the NIGA says it “and our member tribes will continue to remain vigilant through the end of the lame duck session and into the new year.” The NIGA says it “looks forward to working with the Majority Leader and members of the new Congress on the internet gaming issue,” but only so long as they recognize “that any internet gaming related legislation must respect existing tribal rights and preserve the sovereign and constitutionally acknowledged governmental status of Indian tribes.”