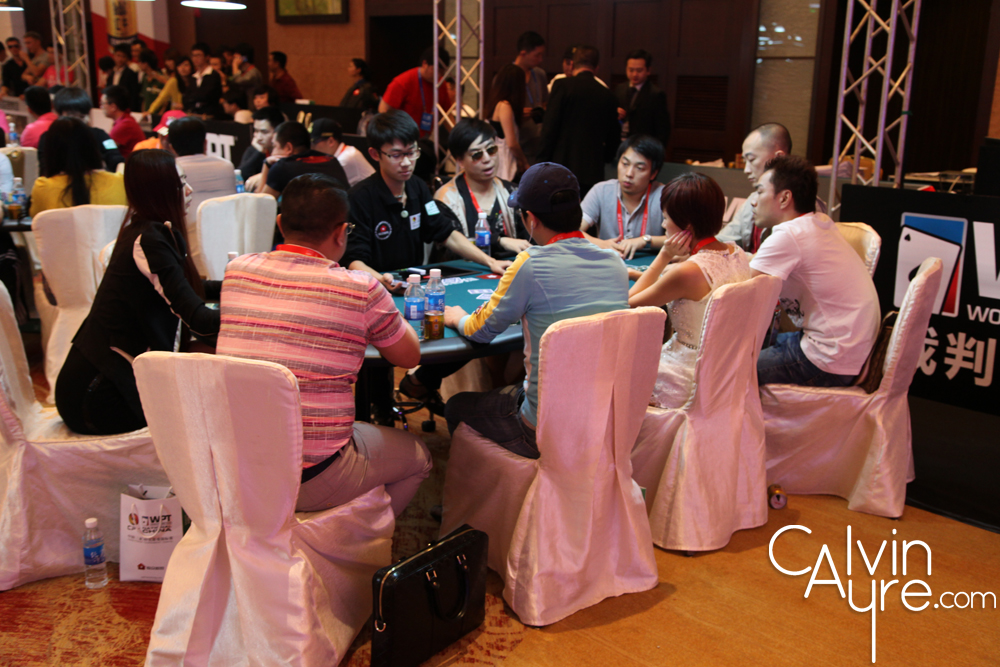 The inaugural WPT event in China, started on December 14th, has attracted over 500 runners. The tournament director, Matt Savage, had his hands full dealing with players that were asking for more seats as he closed the day with 265 entries. The event was capped at 500, but due to the overwhelming demand, he added 50 more seats and some perks to the prize pool like seats and travel expenses for the upcoming WPT LOS ANGELES POKER CLASSIC.

Among the sea of the local players at the MGM Grand in Sanya, we saw some familiar faces. The players that decided to sit down with a starting stack of 20,000 chips, shared the tables with Johnny Chan, Ken Wong, David Chiu and the much beloved Chinese rock star, Wang Feng. 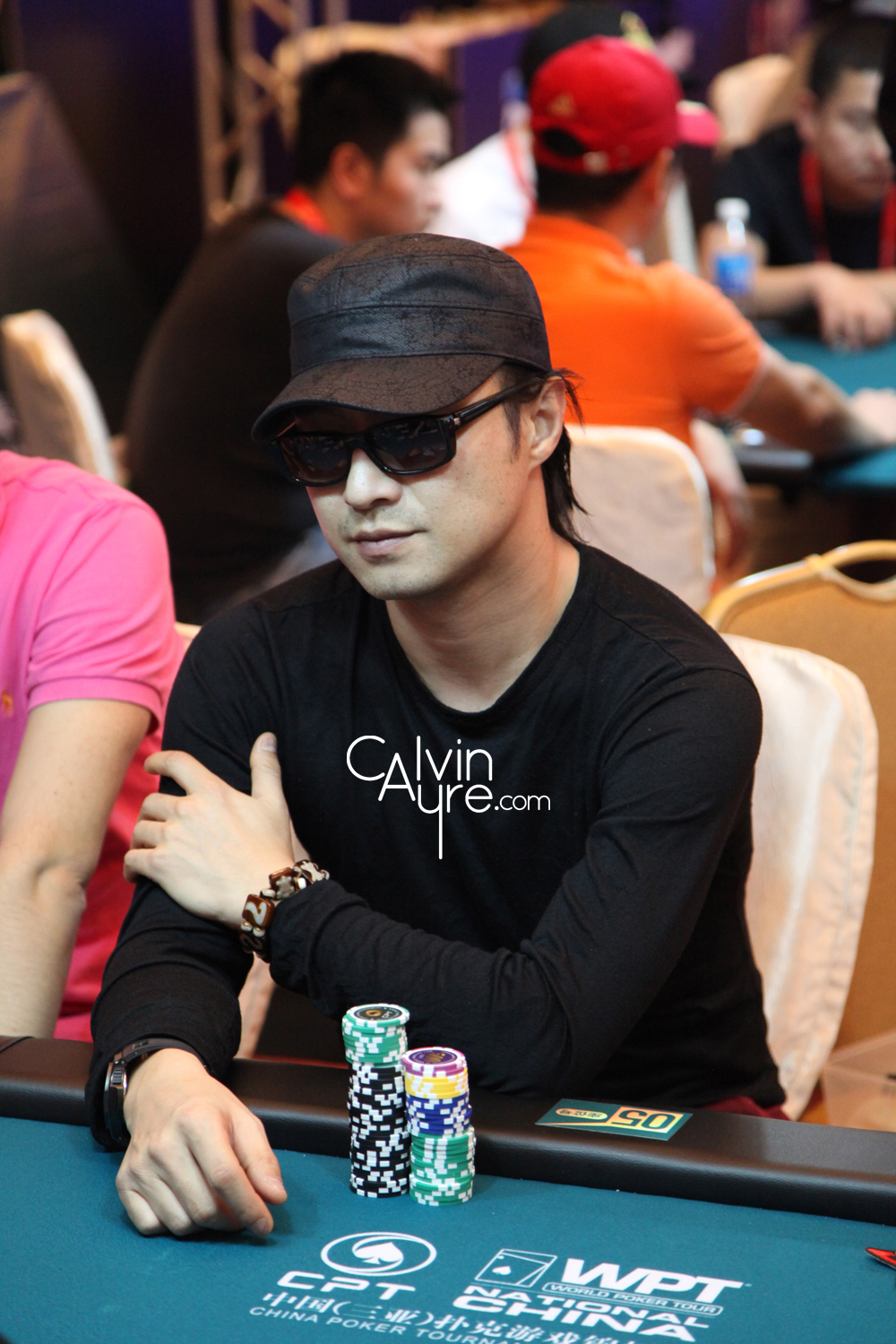 Wang Feng, born in China on June 29th 1971, is a famous Chinese rock musician. He founded the band No. 43 Baojia Street and he won an award as the most popular male singer on the Chinese Mainland at the Channel V’s Music Awards. Now, he’s looking to grab the award for the first ever WPT winner in China.

In addition to the big names in poker was also a big name in the back office of the WPT, the CEO Adam Pliska. Mr. Pliska was eager to share his thoughts on the WPT in China, abroad and his experiences inside the poker industry.

Tatjana Pasalic: How happy are you with the WPT China, the turnout, organisation? What is the plan for China from now on? What is your favourite thing about this event?

Adam Pliska: I am thrilled with the outcome of this event. In fact, despite all the attention the event has generated as the first global WPT sanctioned event in China, it has surpassed our expectations. Not only is the event fully subscribed, the host, Ourgame, has spared no expense in creating a first-class playing experience in what is nothing less than a tropical paradise. The tournament started without a hitch with high profile players like Phil Hellmuth in attendance. It’s a very auspicious beginning for WPT’s presence in China.

Tatjana Pasalic: We see that the WPT is expanding – after getting established in Europe and USA, we see the brand in South Africa, China..what’s next?

Adam Pliska: WPT has experienced a renaissance in the last few years that can only be rivaled by the early years of the (brand). I think you can expect continued global expansion into the world’s premiere locations. While we’re mindful of our continually-expanding schedule, you can continue to expect an expansion of the WPT in areas we’ve not before traveled. The idea is to provide the WPT experience at levels and locations convenient for everyone who wants to play. 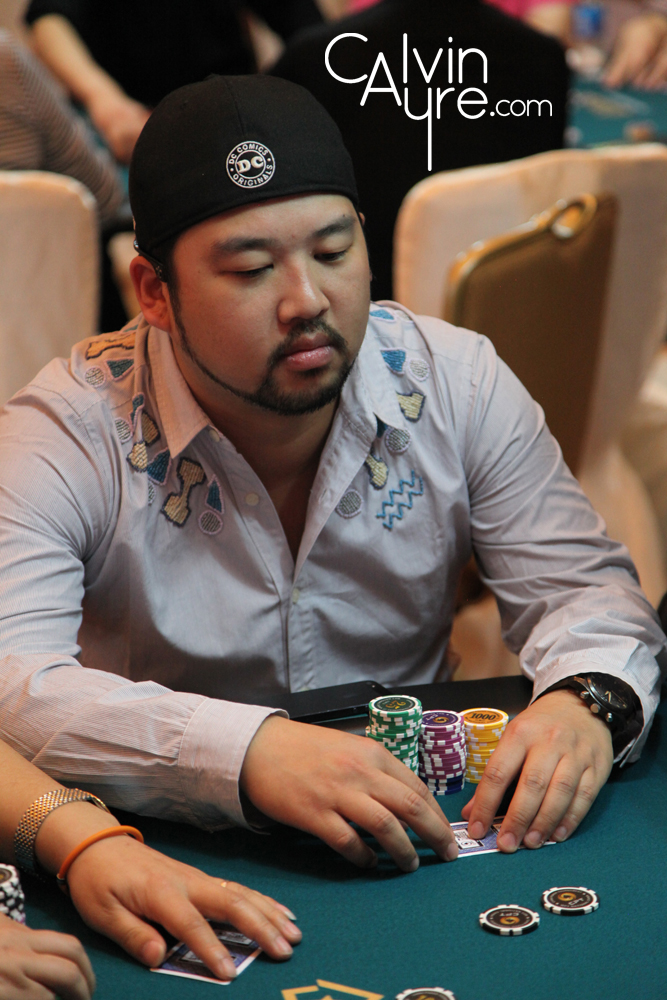 Tatjana Pasalic: You are approaching your 10th year in the poker industry, how has the industry changed over the years, what has improved and what expectation did you have getting into the industry that exceeded/disappointed?

Adam Pliska: Almost a decade ago when I started, it was the wild-west. It was fun, fast and frenetic. Each day I’d arrive in the office never knowing what was next. Since then it’s grown into a mature industry which means greater consistency and more respect for the sport itself. This has meant smarter investment and ultimately a better player experience. While I’m happy that the path of re-growth has been far more steady these past few years, I remain grateful to the many pioneers in the industry who ultimately shaped the market we are in today. In that respect, this first event in China follows in a tradition of trail-blazing and the optimistic feeling on the ground is palpable.

Tatjana Pasalic: California might be opening up for intra-state poker; does WPT plan on having presence in that space?

Adam Pliska: I’m confident that the WPT will be a important player in regulated US market in the future. Until then, we’re just going to focus on continuing to build our core products of great tournaments and world-class television shows.

Tatjana Pasalic: Do you think it would be useful a poker coordinating body that could streamline rules across poker and deconflict major poker events in order to limit fragmentation of the market for the major events? Adam Pliska: There will always be differing offerings in the market. As for WPT, however, we have made a concerned effort to increase standardization at our events. Our Executive Tour Director Matt Savage has been instrumental in implementing standard structures and procedures which I believe has been a benefit to the players. In term of avoiding conflicts, scheduling has always been and will continue to be more of an art than a science. WPT will avoid work to avoid conflicts wherever possible, but the reality is, no amount of effort can make a conflict free calendar as there are too many interests at stake. So I think good communication will remain the key and we’re open and committed to that.

So, with exceeded expectations here in Sanya, we are looking forward to the Day 1B when international and local players clash their chips at the tables, including Phil Helmuth, Jay Tan and McLean Karr. And, for those who busted on Day 1A, there is plenty of sunshine, beautiful beaches, pools and great food in this tropical paradise.