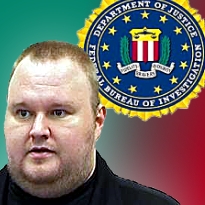 There’s been no shortage of surprising revelations in this year’s dramatic arrest, detention and prosecution of Kim Dotcom, the outsized founder of cloud storage operation Megaupload.com, by US and New Zealand authorities on charges of copyright infringement, racketeering and money laundering. The warrants police used to seize Dotcom’s property in January turned out to be invalid, then NZ Prime Minister John Key publicly apologized to Dotcom for the nation’s intelligence agencies having illegally spied on one of its permanent residents. Now, after the US District Court in East Virginia granted Dotcom’s attorneys the right to view the FBI’s application to seize the Megaupload.com domain, Dotcom believes they’ve found a smoking gun.

The FBI application cited a 2010 Department of Homeland Security (DHS) search warrant that listed 39 allegedly pirated movie files the NinjaVideo website was storing in Megaupload’s cloud. In January of this year, the FBI claimed the continued presence of 36 of these files was proof that Megaupload were incorrigible pirate knaves who needed to take a long walk on a short plank. But Dotcom claims the DHS had instructed him to retain the files because they were crucial to their investigation of NinjaVideo. Dotcom is convinced this is evidence of entrapment that invalidates the case against himself and Megaupload.

The irrepressibly optimistic Dotcom called the discovery a “super-jackpot” and he bets there are more “outrageous” surprises yet to emerge. In August, a New Zealand court ordered US authorities to turn over certain documents for discovery, an order the US has appealed. Dotcom says he now has a better feel for “why the US is working so hard” to keep the documents under wraps. Dotcom expects to eventually reap a $2.6b settlement from suing (a) the US government and (b) the Hollywood entertainment conglomerates whose turf the government is enforcing. Whatever settlement he receives, Dotcom says he’ll apply it to a project to lay fiber optic cable under the sea and offer free broadband internet to New Zealand residents. Dotcom believes the island would make an attractive global data center because it possesses “clean and cheap energy.” (Quite apart from his own.)

Despite Dotcom’s assertions, the US continues to seek to extradite him and three of his Megaupload compadres to America to face trial. A hearing to consider the matter is scheduled for March. In the meantime, Dotcom isn’t sitting still. Earlier this month, he announced a new file-sharing site called Mega that will launch on January 20, 2013 at 6:48 NZ time; the precise one-year anniversary of Megaupload’s seizure. Dotcom says the site will skirt US-based hosting companies, backbone providers and domains to avoid being “threatened by US prosecutors.” Which begs the question: will Dotcom (originally Kim Schmitz) also revise his surname to reflect this .com avoidance?