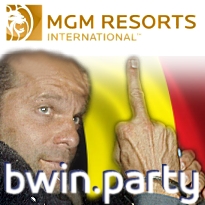 BELGIUM LABELS BWIN.PARTY ‘MOST AGGRESSIVE ILLEGAL OPERATOR’
No doubt the Nevada commissioners were made aware of Belgian authorities’ detention on Tuesday of Bwin.party co-CEO Norbert Teufelberger during his ill-advised visit to the country whose laws his company so flagrantly disregards. While Bwin.party claims it “has always acted in compliance with applicable laws,” that’s not an opinion shared by Belgian Gaming Commission (BGC) legal adviser Peter Naessens, who described the company as “not only the biggest but also the most aggressive illegal operator in Belgium.” Naessens told GamblingCompliance that the other 50 or so operators on the BGC’s blacklist need not necessarily fear that a trip to Brussels would result in their being clapped in irons. “We won’t take the same action against other CEOs if their companies aren’t sending the message to everyone that they are doing something perfectly legal in Belgium and aren’t continuing to attract Belgian players.”

If Naessens’ aggressive diagnosis is accurate, Teufelberger’s trip to Brussels may have been intended to poke the Belgian beehive with a stick in order to provoke an overreaction by Belgian authorities, which (hopefully) would be followed by corrective action from European Commission officials. Industry groups like the Remote Gambling Association and European Gaming and Betting Association have been urging the EC to expedite longstanding investigations of EU member states whose gaming policies don’t mesh with the desires of operators. However, at the same Responsible Gaming Day confab at which Teufelberger was detained, EC ‘online and postal services’ official Werner Stengg told delegates his team was doing what they could with limited manpower and therefore imminent changes were not in the cards.