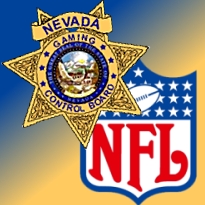 Of course, September saw the eagerly awaited return of NFL betting to Nevada sportsbooks, which always puts a spring in the bookies’ step. But this September was particularly lucrative, with total sports betting handle rising 21.7% over September 2011 and hold percentage rising to an impressive 12.7% from 5.82% last year. Statewide sports win was up 165.4% to $53.4m – a record monthly tally for Nevada, according to GCB analyst Michael Lawton. (And this despite the Nevada books actually losing $631k on NBA bets in September – curse you, Floyd Mayweather Jr.!) The purely NFL portion of the sports pool win was $43.5m – up 271.6% from last year on the strength of a 13.9% hold. Of course, September 2012 benefited from having an extra Sunday of NFL games on which to wager, but hey, a record’s a record.

And best enjoy it now, because October’s numbers will suffer as a result of the parlay carnage and November hasn’t started off on the greatest note, neither. The Las Vegas Sun reported a woman taking Station Casinos’ sportsbook for $100k after hitting a 15-team parlay (13 NFL, two NCAA) this past weekend. Not a bad return for a $5 investment. Still, could have been worse, as five more correct calls and Station would be paying the woman a cool million.

Sticking with Nevada news, sportsbook operator Cantor Gaming, which has been in the headlines recently for all the wrong reasons, has inked a deal with Vertigo Enterprises LLC, which runs one Outpost Saloon in Las Vegas. Outpost customers can now open accounts that allow them to take advantage of Cantor’s mobile sports betting app and WiFi service anywhere in Nevada. Cantor inked a similar pact with RoadRunner Saloons in September. In other Cantor news, the company has reportedly appointed Mark Goldman as VP of Race and Sports Operations.

Shifting to New Jersey, NorthJersey.com’s John Brennan has uncovered a rather curious development in the effort by the pro and college sports leagues to beat back the Garden State’s single-game sports betting plans. Brennan reported that the leagues have filed their opposition to a ‘friend of the court’ brief submitted by Pennsylvania resident Harold Kupersmit, who claims to be a horseracing bettor and founder of The Citizen, “America’s exciting, newest political party,” whose five-point platform includes protecting gamblers from “abusive government” and ending genocide around the globe. Kupersmit is asking the Court to strike down a law requiring racetrack gamblers from having to report winnings over $600. For reasons that aren’t entirely clear, Kupersmit is also requesting the Court award him damages of $100m, presumably because quality psychologists are really expensive these days. The leagues are kindly requesting that the Court tell Kupersmit to fuck off.