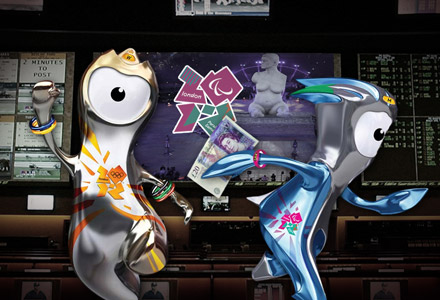 Sports events are game-changers for bookmakers. They bring in much more business – so much that public company’s financial reports take into account the presence or lack of a major sporting event.

But more customers aren’t always a good thing. As the majority of wagering tends to be focused heavily on specific markets, bookmakers’ fate is very much in the hands of a few results.

So, on the face of it the summer of 2012 was a make or break one for bookmakers, particularly in the UK. However, while Euro 2012 attracted all of the attention that you would expect it to, that wasn’t necessarily going to be the case with the Olympics.

As Global Betting and Gambling Consultants (GBGC) director Lorien Pilling explained earlier this year, the Olympics have “never been a major betting event”. Given the International Olympic Committee’s (IOC) pretty sceptical stance on gambling and the fact that most sports in the Olympics receive little media coverage most of the time, this is no surprise.

IOC President Jacques Rogge has been particularly concerned about match-fixing and has even gone far enough to describe the issue as just as much of a threat to the integrity of the games as banned substances.

However, given the UK’s propensity to gamble on pretty much everything, especially when it’s in the news, it was expected for the London games to be a bigger betting than all previous Olympics.

This is an opinion Pilling held and before the games he said: “The London Olympics should be ideal for developing betting on Olympic events if the willingness from betting operators exists.

“In stark contrast to Beijing in 2008 and (as it stands) Rio de Janeiro in 2016, the UK already has a regulated Internet gambling market, the advertising of online gambling is permitted, the UK consumer is well-educated in Internet gambling, and spectators at appropriate Olympic events could even bet in-running on their smartphone.”

Given Pilling’s arguments above and the locality of the event, most bookmakers must surely have expected reasonable amounts to be wagered. However, Coral revealed to Reuters last month that their turnover regarding the games was going to exceed the £50 million estimate that they had previously set. However, their PR director Simon Clare explained that it wasn’t all good news.

He told Reuters: “While turnover is a lot higher than originally predicted, it’s also proving expensive for the bookies as Team GB’s success looks set to continue the patriotic payouts.”

Now, more than three weeks on from the closing ceremony of the games, the dust has settled and bookmakers have had time to reflect on how they did.

Head of PR operations at William Hill is Richard Thomas and he reveals that they too received larger interest than previously expected.

He says: “Turnover on the Olympics far exceeded our pre-even expectations. The number of bets was in excess of a million.”

The biggest betting event of the games was, somewhat unsurprisingly the men’s football final, which saw 21,700 bets placed on it. Another popular event with punters was the flagship athletics event, the men’s 100 metres final that was the subject of 17,800 wagers.

As the amount of turnover clearly caught a few bookmakers by surprise, it was important for them to ensure that they weren’t caught out completely. Offering as many markets as possible was crucial to squeezing every penny out of the Olympics. Fortunately for them, Thomas reveals that William Hill were well prepared for the demand.

He explains: “We did our best to bet in-play on as many events as possible. If it wasn’t over in 9.63 seconds, then we offered in-running betting. This was really embraced by Olympics punters and accounted for 50% of total turnover.”

Some events were always going to be popular, those which have large followings independent of the games were the main attractions as expected. But there were some surprises in the popularity of other disciplines, often caused by a strong sense of British patriotism. Unfortunately for the bookmakers, due to Britain’s success this wasn’t necessarily a good thing for them.

“Football, tennis, basketball and athletics were our best sports for turnover. Predictably, the sports where we performed brilliantly, or where our high-profile athletes prospered were not good, and we showed a loss on rowing and athletics,” says Thomas.

“Mo Farah punished the bookies more than any other athlete or team, both his 10k and 5k wins were bad for us.”

It wasn’t all bad for Hills though as they did win big on the Great Britain versus South Korea football game thanks to the Asian’s beating the hosts.

Legacy is a word which those of us in the UK have all had rammed down our throats in the past 18 months. It was used as a selling point to justify spending such exorbitant amounts of money to stage a sporting event and included the slightly cheesy tagline ‘inspire a generation’.

The London Olympic Games Organising Committee (LOGOC) certainly wouldn’t have been thinking about betting when they were devising these strategies, but that’s inadvertently what they might have done.

For many UK punters who would never previously bet on many of the sports in the Olympics may have done during the games. Some might even continue to do so. Speaking from personal experience Ryan Le Clos’ victory over Michael Phelps saw me win my first ever bet on swimming as well as his first ever gold medal.

This is something that Thomas reveals Hills have picked up on and will look to capitalise on in the future.

He says: “For us, it has highlighted a desire by sports fans to bet on non-traditional betting sports. The brilliant performances in both athletics and cycling of some of Team GB will surely propel the profiles of both sports, and may heighten desire from punters to follow the sports outside of the Olympics.”

But this long summer of sport isn’t over quite yet. The Paralympics are still on-going and are traditionally even less associated with gambling than the Olympics. However, that hasn’t stopped Hills from offering markets on it.

Thomas reveals: “We have offered a number of markets on the Paralympics, targeting the key participants and events.”

Despite many not being entirely comfortable about the idea of mixing gambling with the Olympics and the Paralympics, they look set to continue to mix. As Pilling mentioned, the true test will come in four years but you can bet that as long as there’s the demand, there will be plenty of Olympic markets to bet on.