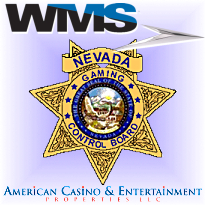 The Nevada Gaming Control Board has given its stamp of approval to two more prospective online poker operators – gaming device maker WMS Gaming Inc. and Nevada brick-and-mortar casino outfit American Casino & Entertainment Properties LLC (ACEP). WMS, which launched its online subsidiary Williams Interactive in July to oversee its Jackpotparty.com operation in the UK and the Lucky Cruise social gaming app, was granted preliminary approval for its two applications to become an online poker operator as well as an interactive gaming service provider.

ACEP, which owns the Stratosphere and two Arizona Charlie’s casinos in Vegas plus the Aquarius in Laughlin, Nevada, also received the nod to become an online poker operator. ACEP’s head of iGaming Alec Driscoll says the company plans to launch a free-play poker site by the end of the year as a marketing tool. Both WMS and ACEP still require the approval of the Nevada Gaming Commission, which could give its assent at its next sitting on Sept. 20. So far, Nevada has fully approved four companies for operator licenses: Bally Technologies, IGT, Monarch Interactive and South Point Poker. Two other companies, Shuffle Master and Global Cash Access, have been awarded interactive service provider licenses.

Sadly, while Nevada is pressing ahead with its plans to have real-money intrastate online poker up and running this year – South Point says it could go live “sometime in October” – the state’s real goal of serving as the base around which a federal online poker regime revolves will have to wait at least until 2013. The Las Vegas Review-Journal’s Howard Stutz reported that just one day after downgrading Caesars Entertainment, Fitch Rating Services issued a report stating that the recent proclamation by the Republican National Committee that the GOP desired a ‘prohibition of gambling over the internet’ had made passage of a federal online gambling bill “unlikely in the near term.”