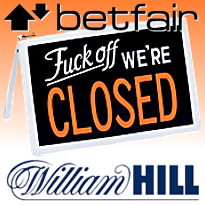 Exchange betting outfit Betfair has closed rival sportsbook operators ‘hedging’ accounts in what eGamingReview reports is a bid to compel competitors to sign up for licenses to access Betfair’s live data stream. Betfair’s API and data boss Tom Johnson told eGR the company “closely monitor” competitors’ use of Betfair’s live exchange prices, which he described as “very valuable intellectual property.” Johnson said that if Betfair detected high data usage by accounts that it determined were “operated by a betting operator or have an association with a betting operator” which hadn’t yet signed up for a data license, “we are likely to close these accounts.” Johnson admitted that Betfair has occasionally chosen to block a company’s IP address rather than close individual accounts.

Johnson said Betfair has convinced “more than 20” operators to sign up for data licenses – the cost of which can top six figures, depending on usage – and that they don’t close accounts “until the licensing process has been fully explored.” An anonymous exec from one of the operators blocked in this fashion told eGR the tactic was “the biggest sign that [Betfair are] going more towards fixed-odds; the fact that they see certain operators as competition.” The unnamed exec suggested the timing of the action was related to Betfair’s new CEO Breon Corcoran officially taking the reins, but Johnson said the process was well underway before Corocran’s tenure began.

In other Betfair news, the company has signed on to sponsor Europa League football on ESPN. The deal kicked in Thursday and will cover all live matches, repeats and highlights shows plus the Europa League section on ESPNFC.com throughout the current season. Betfair has also inked a two-year partnership with boxing promoter Matchroom Sport to promote an expected 20 competitions on Sky Sports.

William Hill, which recently lost its epic tilt with Betfair over the UK horseracing levy, has signed on as “official supporter” of the Scottish national football team. Hills is already the “official betting partner” of the Scottish Premier League and title sponsor of the William Hill Scottish Cup. The deal with the national team is for an initial term of two years. Stateside, Hills is gearing up for its first National Football League season as a licensed Nevada bookmaker. Hills has just released its first television spot for the Nevada market, which makes sure to pimp its recently rebranded mobile wagering option.