Home / Business / Android own almost 90 percent of some of Europe. Is it enough? 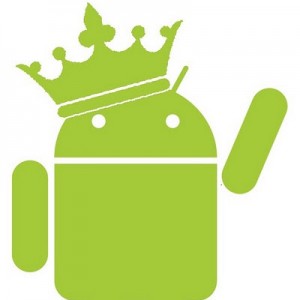 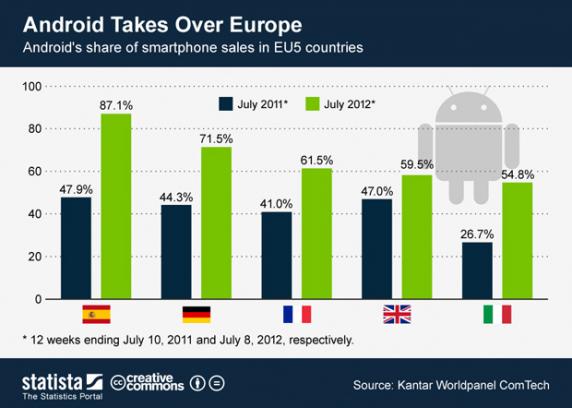 Android has taken a stranglehold over the European market that it seems unlikely to relinquish with Spain, Germany and Italy seeing the largest spikes in uptake. Statista’s latest chart of the day shows in black and white, or should we say Android-Green and black, the increase in uptake of smartphones running Android in the past year across various European countries.

Spain has seen Android go from cornering 47.1 percent of the market last year to now having 87.1 percent. Much the same can be said for Germany with their share rising to 71.5 percent from 44.3 percent this time last year. In France they now have a 61.5 percent share (41 percent last year) and even in the UK they’ve seen the share go from 47 percent right up to 59.5 percent. Lastly Italy now has 54.8 percent Android owners, the number being just 26.7 percent last year.

Many will point the fact Samsung’s Galaxy SIII came out during the last six months and they would be right in thinking it’s boosted sales. The fact of the matter is that having almost 90 percent of Spain using an Android and over 70 percent in a country like Germany is very impressive.

The figures in Europe supplemented a worldwide trend that saw Android tip the scales with 68.1 percent of the market and 154 million phone shipments worldwide. The entire market grew by 42.2 percent and only Android and the rapidly expanding Microsoft Windows Phone outgrew it in the second quarter of 2012. When you break it down to the manufacturers themselves, Samsung and Apple own 49.5 percent of the market with the remainder left to scrap it out for the rest.

WATCH OUT FOR THE NEW KID ON THE BLOCK

What the figures don’t take into account is the fact that a new iPhone is imminent and it could conceivably smash these numbers out of the park. Ok then, it won’t affect them that badly. What it will be though is the must-have device ahead of Christmas and in terms of shipments it could take a large chunk away from Android.

The only problem Apple will have is price and with the world economy in such a parlous state Android might just continue to sell billions of devices for a while yet. Just don’t mention a cheaper iPhone or they’ll kneecap ya.